Digging for dinosaurs in the desert — swimmers, at that 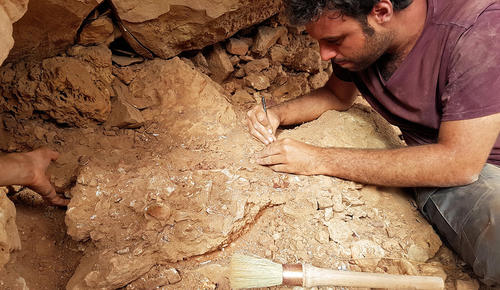 Matteo Fabbri’s happy place is halfway up a steep hill of earth and rocks in the Sahara Desert.

There, beneath the broiling Moroccan sun and tons of burnt-orange dirt, are the fossilized remains of a dinosaur with a fin. Fabbri, a 30-year-old graduate student in paleontology at Yale, has returned to this hillside many times over the past five years to collect more of the creature — and determine the meaning of its intriguing physiology.

“It’s the best part of my job,” Fabbri says of the field work. “I’m able to go to a place I never would have been able to see otherwise. And when you find something, it’s amazing.”

He and his colleagues, including Yale paleontologist Jasmina Wiemann, have analyzed enough of the Moroccan fossil to know that it may cause scientists to rethink the idea of swimming dinosaurs. They found the first unambiguous evidence for an aquatic propulsive structure in a dinosaur.

In recent decades, paleontologists had concluded that dinosaurs were strictly terrestrial, except for those dinosaurs that took to the air — in short, that there were no swimming dinosaurs.

But in a new study in Nature, Fabbri and his colleagues posited that Spinosaurus aegyptiacus, a large theropod from the Cretaceous period, had a fin-like tail that enabled it to spend most of its time in the water. Previously, it was thought that Spinosaurus was an animal that waded into shallow rivers to find prey. 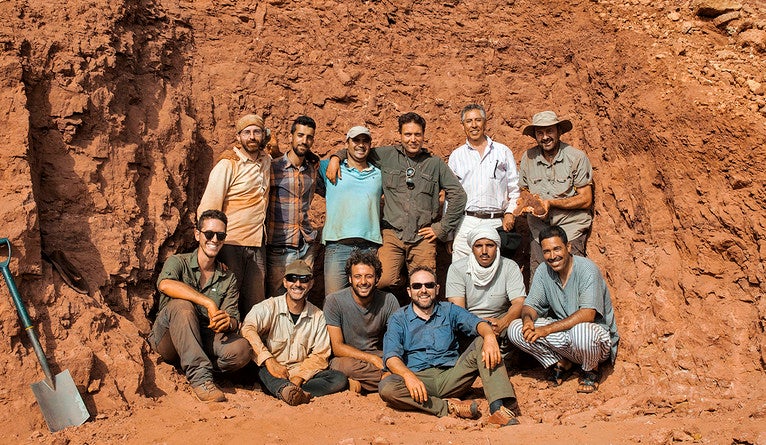 It was one of the Moroccan Spinosaurus bones. Fabbri assessed the age by cutting into the bone and examining lines formed by periods of arrested growth — almost akin to using rings in a tree trunk to gauge age. Fabbri estimated the bone’s age as 90-100 million years old.

“But we also got a surprise,” he said. “We had expected the bones to be hollow, as they are in most dinosaurs. Yet this bone was dense. Compact. It was weird and exciting, and one of the smoking guns that told us this animal was mainly a swimmer.”

Since his initial work with the fossil bones, Fabbri has made multiple trips to Northern Africa to do field work. He and his colleagues lived in naturally cooled mud houses. Each morning they piled into an SUV with gear and lots of drinking water for the drive to the dig site: the Kem Kem fossil beds of southeastern Morocco.

A local man had originally discovered the Spinosaurus skeleton in 2008, when he noticed a bone protruding from a hillside. The site is now secured for long-term scientific field work, thanks to permission from the country’s Ministry of Mines, Energy and Sustainable Development.

The work is not without its challenges, Fabbri said.

“We’ve had sandstorms. A lot of sandstorms,” he said. “We’ve also had scorpions and horned vipers. And the heat — it can get to more than 120 degrees. It’s so hot that you don’t sweat.” 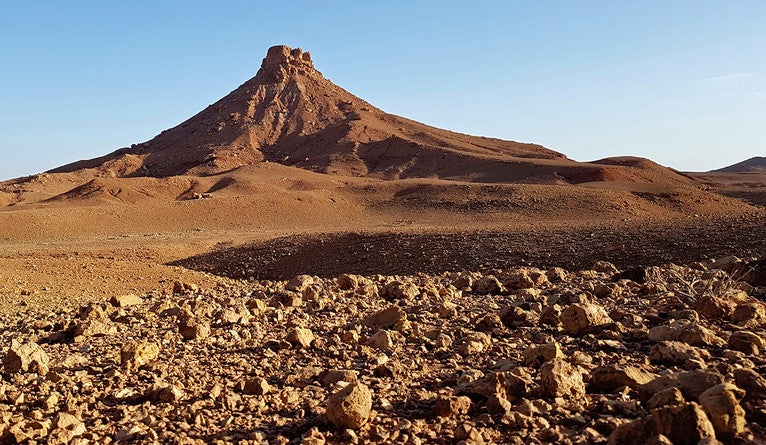 In order to get at the skeleton, scattered across a horizontal plane halfway up a hill, the researchers had to remove all of the dirt directly above the skeleton. This was an area roughly 9 to 12 meters cubed.

As they got closer to the bones, Fabbri and his colleagues used small hammers and other tools to remove individual pieces. They wrapped each item in gypsum in order to preserve the pieces as they dried.

His favorite day in the field, he said, was the day his team found key pieces of Spinosaurus’ skull and tail. “The biggest news came from the tail,” he said. “That tail actually had a sail.”

The team also found teeth and portions of the spine, as well. The researchers will look for more of the skeleton, once the COVID-19 pandemic recedes.

Fabbri said he’s likely to continue his field work in northern Africa even after his work on Spinosaurus concludes.

“There are great paleontology sites in China, America, and Europe that have been very well explored for many years,” he said. “For the past decade, South American sites have been booming. Africa is the least explored place on Earth for this. We know more about Antarctica than we do about Africa.”