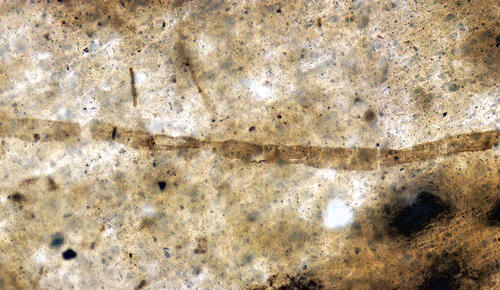 In a new study, researchers confirmed that kaolinite, a mineral found in certain fine-grained rocks around the world, is a key ingredient for preserving some of the earliest forms of complex life.

The researchers also said the importance of kaolinite in the fossilization process has led to a bias in the early fossil record toward organisms that lived in places where kaolinite forms.

“This insight may provide a blueprint for paleoenvironments that are conducive to ancient fossils on Earth and possibly on other planets, like Mars,” said senior author Derek Briggs, the G. Evelyn Hutchinson Professor of Geology & Geophysics in the Yale Faculty of Arts and Sciences.

Briggs said he and his colleagues wanted to understand the fossilization process for complex life forms that lived before the evolution of diverse skeletons during the so-called Cambrian era, which began about 541 million years ago. The researchers investigated microscopic, soft-bodied pre-Cambrian organisms as old as around 800 million years from sites in Russia, the Canadian Arctic, and the Norwegian archipelago Svalbard.

The researchers discovered that such traces of early life were encased in halos of the clay known as kaolinite. The presence of kaolinite suppressed the decay of the cells of these organisms — which include bacteria, fungi, and algae — enabling their fossilization. A similar association promoted the preservation of soft-bodied Cambrian animals such as those in the Burgess Shale of British Columbia.

“This suggests that the early fossil record may be biased to tropical environments or periods of high clay production,” Briggs said.

Ross Anderson, a former graduate student in the Briggs lab who is now at the University of Oxford, is first author of the study. “Our discovery that animals are absent in 800-million-year-old rocks where conditions are ideal for soft-tissue preservation suggests they had yet to evolve and constrains the timing of animal origins,” Anderson said.

Co-authors of the paper are from Oxford, Harvard, MIT, and Diamond Light Source in the United Kingdom.

The study appears in the journal Interface Focus, which is published by the Royal Society.