How Life on Our Planet Made It Through Snowball Earth 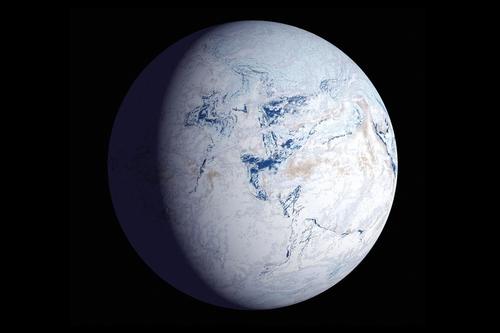 Today, the world is warming. But from about 720 to 635 million years ago, temperatures swerved the other way as the planet became encased in ice during the two ice ages known as Snowball Earth.

It happened fast, and within just a few thousand years or so, ice stretched over both land and sea, from the poles to the tropics. Life lived in the oceans at the time, and the encroaching ice entombed that life, cutting it off from both the sun and the atmosphere.

“This is the one time when Earth’s natural thermostat broke,” said Noah Planavsky, a biogeochemist at Yale University. “The question on everyone’s minds was: How did life actually make it through this?”

Glaciations can drive mass extinctions of life. Yet life, including perhaps our distant animal ancestors, somehow survived these deep freezes. In research published Monday in Proceedings of the National Academy of Sciences, Dr. Planavsky and his colleagues report the discovery of oases just beneath the ancient ice sheets that likely helped life persevere.

Snowball Earth came to an abrupt end over a half-billion years ago, but its marks still exist in remote corners of the planet. In 2015, to reach one of those corners, Max Lechte and his graduate adviser at the time, Malcolm Wallace, both sedimentologists at the University of Melbourne, drove 15 hours into the South Australian outback.

They trekked over hills made of red-colored rock, and it was so hot out — about 122 degrees Fahrenheit — that the soles of Dr. Wallace’s boots melted.

“A bit of duct tape fixed that up,” said Dr. Lechte, who led the new research.

These red-hot rocks formed in the oceans during the snowball glaciations, and their color caught Dr. Lechte’s eye, so he took a few samples. Then, in 2015 and 2016, he traveled to Namibia and Death Valley in California and found more rocks — also red — that formed at the same time.

The rocks’ color signaled to Dr. Lechte that they are rich in iron, which means they turned red for the same reason that old cars with iron exteriors turn red: They rusted.

“This is the first direct evidence for oxygen-rich marine environments during Snowball Earth,” said Dr. Lechte, now a postdoctoral researcher at McGill University in Canada.

But how that oxygen got into the oceans in the first place was a mystery. The atmosphere is a major source of oxygen for the oceans, and with the ice sheets of Snowball Earth acting as giant air-blocking shields, oxygen in seawater should’ve been nonexistent.

“This could’ve led to anoxic oceans, which could’ve killed off life-forms that need oxygen to survive.” Dr. Lechte said. “It presents a bit of an unsolved problem.”

In labs at Yale as well as Nanjing University in China, Dr. Lechte and his team crushed the iron-rich rocks, dissolved them in acid and measured the abundances of different iron isotopes. They found that the iron in rocks that formed far out in the open oceans rusted much less than the iron in rocks that formed closer to land, right where ice sheets dove from continents and into the oceans.

Today, beneath ice sheets in Antarctica, glacial meltwater streams flow into the Southern Ocean. That water melts from ice that can have air bubbles trapped inside it, and those bubbles can seed the meltwater streams with oxygen. On Snowball Earth, Dr. Planavsky explained, such oxygen-laden streams flowed into the oceans around the edges of continents and sustained life.

Paul Hoffman, a geologist at Harvard University who pioneered the Snowball Earth hypothesis, thinks this idea for how oxygen made it into the oceans is solid. “I’m attracted to the idea, and I think it’s consistent with my own observations,” he said.

But, Dr. Hoffman added, whether or not this oxygen pump was the main thing that helped many living things survive those ice ages is still an open question.

“We just don’t know enough from a theoretical standpoint about how life would have responded to the challenge of a Snowball Earth,” he said.