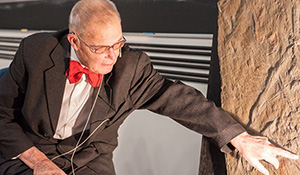 Dolf Seilacher, whose scholarly work and fossil illustrations earned him regard as one of the 20th century’s great paleontologists, died April 26 in Germany. He was 89 and served as an adjunct professor at Yale for more than 20 years.

During a seven-decade career that began in Germany shortly after World War II, the widely traveled, art-loving, Vespa-riding Seilacher probed the relationship between extinct organisms and the environments in which they lived.

His work advanced understanding of trace fossils, pattern formation, and the factors controlling the forms organisms take, as well as fossil preservation, Ediacaran fauna, and other aspects of invertebrate paleontology and evolutionary theory.

Derek Briggs, Yale paleontologist and outgoing director of the Peabody Museum, called Seilacher “one of the most influential paleontologists of the latter half of the 20th century.”

In addition to his seminal scholarship, Seilacher was widely acclaimed for his 1997 book “Fossil Art,” a heavily illustrated volume blending science, art, and commentary. Produced as a companion to a traveling exhibition of natural artworks (and first published in German), the book provides images of fossils carefully chosen by Seilacher for their aesthetic qualities, particularly exceptional patterns and shapes.

Central to Seilacher’s observational method was his production of detailed drawings of the fossils he studied. As he told the student magazine Yale Scientific in 2010, “You do not see what you have not drawn.”

Jay Ague, chair of Yale’s Department of Geology & Geophysics, called “Fossil Art” “breathtaking” for its presentation of the relics that “fired Dolf’s imagination and fueled his discoveries.”

“Reading this book will give you some insights into what it was like to be with him as he told the stories written in the rocks,” Ague said.

Born Feb. 24, 1925, in Stuttgart, Germany, Adolf Seilacher received his Ph.D. from the University of Tuebingen in 1951 and taught there for most of his career. He also held visiting or adjunct positions at many universities around the world, including in Iraq, Jordan, China, Japan, Argentina, Europe, and the United States.

From 1987 through 2009, he was an adjunct professor at Yale, spending part of the year in New Haven teaching, researching at the Peabody, and guiding student projects.

In 1992 Seilacher won the Crafoord Prize, which is administered by the same organization that awards the Nobel Prizes, the Royal Swedish Academy of Sciences. The Crafoord Prize — one of the most coveted awarded in science — honors researchers in disciplines the Nobel does not recognize. In its citation, the prize committee said, “Adolf Seilacher belongs to the great founders of schools of method and thinking in the geosciences.”

Widely traveled, Seilacher sought fossils all over the world, and he was adept at finding routes to places where he could smoke and think.

“The true measure of Dolf’s brilliance was that he figured out how to get out onto the second floor balcony of [Kline Geology Laboratory],” Ague said in a recent note to colleagues in geology & geophysics. “I will always remember him on the balcony smoking a cigar while he envisioned ancient seas and all that lived in them. His uncanny observational skills, thoughtful mentoring, riveting stories, and legendary jokes (not necessarily good…) will be sorely missed.”