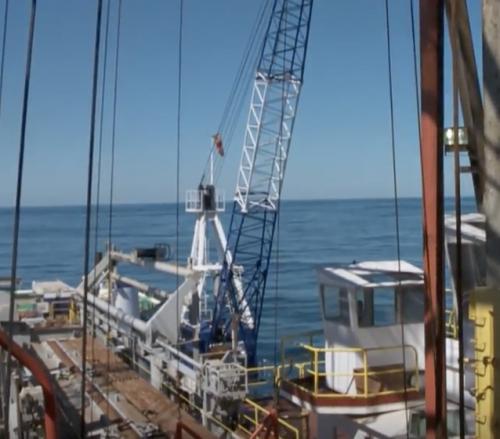 Scientific ocean drilling is a highly international and interdisciplinary endeavor that has contributed fundamental breakthroughs on topics as diverse as plate tectonics, geological time, and glacial-interglacial climate dynamics.  Since it began in the 1940s, scientific ocean drilling has looked to engage the public and the community through scientific outreach.  John Steinbeck even partook on the first major expedition to drill the Mohorovičić discontinuity and wrote of it in a 1961 article in Life Magazine.
The current scientific drilling community, the International Ocean Discovery Program (IODP), launched a series of educational videos targeted at bringing in the next generation of sea-going scientists from around the world, and inspiring scientists to utilize their vast (and free) digital and physical database.  Pincelli Hull, assistant professor of geology and geophysics, stars in the most recent video on the role of shipboard sedimentologists in ocean drilling expeditions and has worked with the IODP and participated in multiple outreach videos in the past.