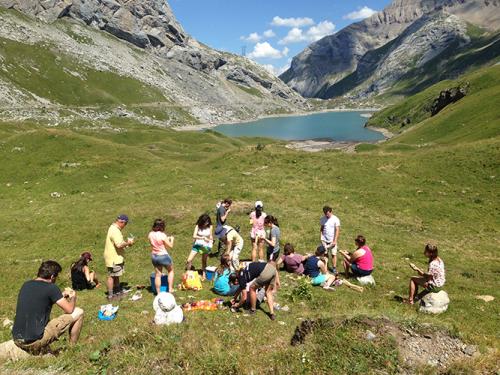 For 15 days in August, a group of 23 G&G students and faculty traversed the European Alps and Apennines from Germany, through Switzerland, and into Italy. Led by Professor Mark Brandon, and graduate students Ross Anderson and Holger Petermann, with the help of Professors Derek Briggs and Celli Hull, the group travelled some ~3,000 km taking in the sedimentary record of Earth history preserved in the tectonic settings of these two mountain belts.

The sedimentary basins visited preserved an unrivalled view of Mesozoic and Cenozoic Earth history. Geochemists and climate scientists were treated to pelagic carbonate sediments in Umbria Marche, Italy that record Milankovitch cycles in great detail in addition to evidence of bolide impact and extinction at the Cretaceous-Paleogene boundary. The group also saw evidence of large fluctuations in ocean chemistry with Mesozoic ocean anoxic events, seeing both the Toarcian event in southern Germany and the Bonarelli OAE2 event in Furlo Gorge, Italy.

For the paleontologists, highlights included the famed Jurassic deposits of southern Germany with the exceptionally preserved fossils of the Solnhofen limestones and Posidonia shales, as well as the younger Eocene Messel Pit. They were also treated to seeing the Italian Rosso Ammonitico, an ammonite rich Jurassic building stone used around the world, and gained a perspective on how fossils are used by other geoscientists as they encountered stretched belemnites in the Swiss Alps.

Structural geologists were able to walk through two mountain belts seeing the many folds and faults, which uplifted these marine basins to sit atop mountains. They also got the chance to see the famed Glarus Thrust (the first thrust fault to be discovered) near Flims, Switzerland; and at Simplon Pass, Switzerland to see beautiful examples of ductile deformation with sigma and delta pressure shadows.

Geophysicsts were not disappointed either with the opportunity to transect the Earth’s crust down to the Moho, as we walked through the Ivrea and Sesia zones of the Alps from Lago Maggiore up to Brig, Switzerland. They saw a large ophiolite complex complete with pillow basalts and radiolarian cherts in the Ligurian of northern Italy. They also got to experience some of the effects of large bolide impacts when we visited the Ries Crater in southern Germany.

Metamorphic geologists were in for a real treat as we visited the area around Zermatt, Switzerland. Here, in the shadow of the Matterhorn, they were able to see pillow basalts differentially metamorphosed with eclogite cores and blueschist rims near the Pfulwe pass. They also got to see the economic and culturally important Carrera marble quarries – the same marble from which Michelangelo’s David was carved.

Throughout our traverses over these two great mountain ranges the students also sampled the different cultures of Germany, Switzerland, and Italy. We drove over three of the great Alpine passes (Gotthard, Simplon, and Grand St Bernard); some used by the Romans to cross the mountains and all providing wondrous views. In southern Germany we stayed in the medieval walled town of Nordlingen, one of the few towns to have a complete wall in tact. While in Italy we visited the cathedral of the Renaissance in Florence and lodged in a small hilltop castle where St Francis of Assisi stayed on his pilgrimage.

The students returned after two weeks in the Alps with a unique perspective on the European continent, the Earth history it records within its rocks, and how its mountain ranges were formed.