The following links contain information about the curriculum, instructions for applicants, and the current program brochure.

Congratulations to the Energy Studies Class of 2021, and to their families, for their perserverance and tenacity during a extraordinary time!
Here are the Yale Energy Scholars of the Class of 2021 and their capstone projects: 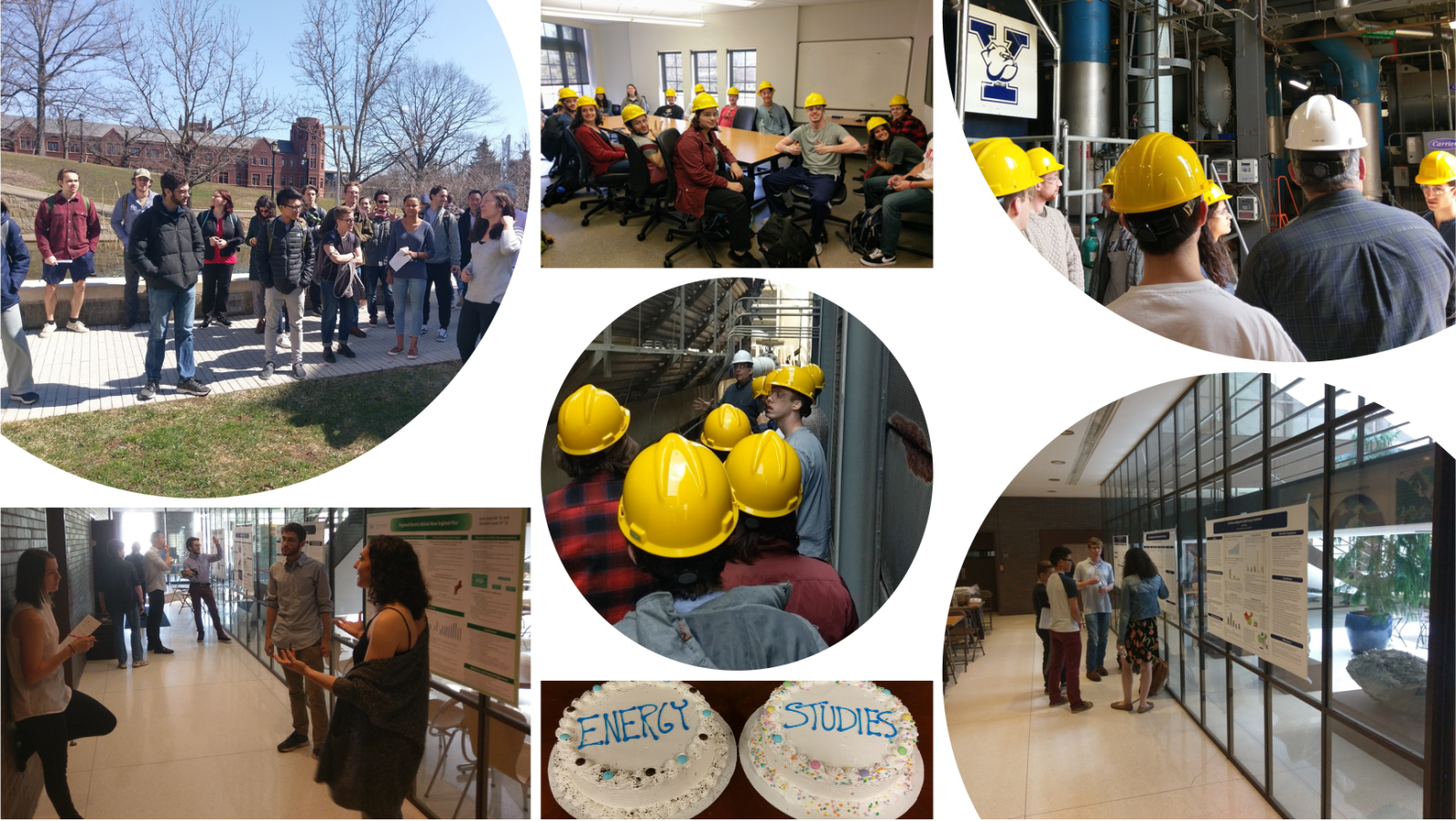 Energy Studies is a multidisciplinary academic program (MAP) in Yale College. The curriculum is designed to provide selected undergraduates with the knowledge and skills needed for advanced studies, leadership, and success in energy-related fields. Energy Studies scholars must also complete the requirements of a Yale College major, since Yale does not offer a major in Energy Studies.

Answers to these questions involve the science & technology of energy. Today, despite all the progress of the last twenty years in renewable energy sources, such as wind and solar energy, about 80% of the world’s primary energy still comes from fossil fuels—coal, oil, and natural gas. That number, which comes as a surprise to many, highlights the challenge of a rapid transition to renewable energy. What new technologies, new breakthroughs, can speed up the move away from fossil fuels?

Many students will be interested in the environmental impacts of modern energy use, especially air and water pollution and climate change. We now know that burning fossil fuels is the main driver of accelerated climate change and that to avoid its potentially catastrophic consequences—extreme storms, droughts, floods, and wildfires—the world needs to reduce man-made greenhouse gas emissions, especially carbon-dioxide emissions from fossil fuels, to zero within the next three decades. Are there realistic pathways to a “Net Zero” energy economy by the year 2050? What are the consequences if the Net Zero target is missed? Can carbon dioxide be removed from the atmosphere artificially? Can climate be “geoengineered” to avoid excessive warming?

Other students will be interested in energy’s social and economic impacts. Moving away from fossil fuels will be hard enough on its own, but more difficult still is making this transition while providing modern energy services to the hundreds of millions of people around the world who now lack them. This is the challenge of Energy/Environmental Justice: Nearly 500 million people today have no access to electricity; 2.5 billion have no access to modern energy for cooking or heating. What social and economic changes are needed to provide “Affordable and Clean Energy for All”—one of the 17 U.N. Sustainable Development Goals?

The three aspects of energy just described form the three multidisciplinary tracks of Energy Studies: (Track 1) Energy Science & Technology, (Track 2) Energy & Environment, (Track 3) Energy & Society. Students in the program take at least 2 courses in each of the 3 tracks and complete a capstone project in senior year.  There are also two special Energy Studies seminars: one in junior year focuses on an international, multidisciplinary look at the world’s energy transiton, and one in senior year focuses on student capstone projects.

Admission to Energy Studies is by application, normally in a student’s sophomore year. The enrollment process starts in the fall term, in coordination with the other Yale MAPs. The deadlines for application are announced in an e-mail to sophomores from the Yale College Dean’s Office and by notice in the Yale Daily News. After fulfilling the program’s requirements during their junior and senior years, and completing the degree in their majors, Energy Studies scholars receive certificates at graduation which become part of their academic records in the Registrar’s Office. Graduates of the program are invited to join the Yale Alumni in Energy organization.

The requirements for Energy Studies are the completion of six courses from a list approved by the faculty advisory committee, plus a senior capstone project. Starting with the Class of 2022, the multidisciplinary distribution requirement is that at least two courses must be taken in each of the program’s three tracks:

Additionally, no more than two of the courses counting toward the program’s requirements can be required courses in  the student’s major. (There is no limit on elective courses in the major counting towards Energy Studies.) Double majors can use two courses each from those required for their two majors. At most one of the six courses counting for Energy Studies can be taken Pass/Fail or Credit/D/Fail.

The capstone of the program is a senior project, which may take the form of a traditional senior essay or senior project (with permission, a student’s senior essay/project in the major may fulfill this requirement); a credited or uncredited indepedent study project completed in senior year; or an internship in an energy-related field following junior year with a written report submitted in senior year. The Energy Studies program and the Yale Center for International and Professional Experience can help with arranging internships.

Yale Climate & Energy Institute (2009-16) launched the Energy Studies Undergraduate Scholars program in the fall of 2013 for a five-year trial period, with a curriculum encouraging undergraduates to explore the links between modern energy use and climate change. More than one hundred students completed the program’s requirements during its first five years, with nearly all going on to careers in energy-related fields. In May 2018, the Yale Faculty of Arts & Sciences voted to continue Energy Studies as a Multidisciplinary Academic Program (MAP) for another five-year term. Twenty-one graduates in the Class of 2021 completed the program’s requirements, making for a total of well over 200 Yale Energy Scholars since 2014. More than eighty rising juniors and seniors are enrolled in the curriculum for the 2021-22 academic year.

The laws expressing the relations between energy and matter are not soley of importance in pure science. They necessarily come first…in the world record of human experience, and they control, in the last resort, the rise or fall of political systems, the freedom or bondage of nations, the movements of commerce and industry, the origin of wealth and poverty and…general physical welfare.
— Frederick Soddy, Matter and Energy, 1912 (Nobel Prize in Chemistry, 1921)

It is fashionable to denigrate the achievements of modern industrial society [based on an abundance of energy] and compare them unfavourably with the imagined virtues of a simpler past…Of course they have not brought universal happiness. But it is silly to maintain that they have not freed many people from a great deal of pain and misery. The most serious objection to them is their exclusiveness. They have been confined to too few people. The challenge to democracy is to retain as much as possible of these good things while managing the great changes required in adjusting to a lower-energy way of life. If it fails, then the collapse into an authoritarianism of either the political right or left seems inevitable.
— Gerald Foley, The Energy Question, 1976

Designing effective measures to slow or prevent climate change requires understanding not only the physical laws that carbon dioxide obeys, but also the more fluid laws of politics and economics.
— William Nordhaus, The Climate Casino, 2015 (Nobel Prize in Economics, 2018)