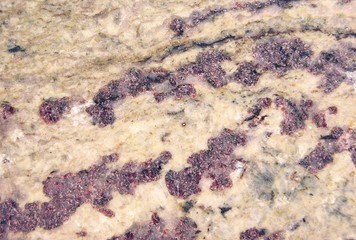 A soaring mountain range as tall as the Himalayas once towered over the U.S. East Coast. Some 20 miles (32 kilometers) of rock have since transformed into sand and mud, exposing an outcrop of the most extreme rocks in America.

Banded with colorful, unique garnets, the gneiss — a form of metamorphic rock — was pushed as far as rock can go before it melts, to 1,800 degrees Fahrenheit (1,000 degrees Celsius), geologists report in the Dec. 13 issue of the journal Geology.

The find is the first discovery of ultrahigh temperature metamorphic rocks in the United States, said Jay Ague, a professor at Yale University and lead author of the study. The next hurdle is figuring out how they formed, he said.

“The fact that these rocks are there at all challenges all the existing models for mountain building in the area,” Ague said. “These ultrahot [rocks] are becoming an important part of how we think mountain belts form,” he told OurAmazingPlanet.

In appearance, the gneiss looks “quite ordinary,” Ague said — it doesn’t have the classic collection of minerals found in ultrahigh temperature rocks in Canada or other continents. In fact, Ague, who specializes in metamorphic rocks, walked over outcrops of the gneiss for nearly 20 years without recognizing its unique history. He even brought samples back to his lab at Yale, but only for the interesting minerals in veins crossing the gneiss.

Finally, in connection with a separate study, Ague and his colleagues recently examined the gneiss under a microscope. [Gallery: Hidden Rainbows in Ordinary Rocks]

Garnets in the gneiss had patterned inclusions of rutile, a mineral that also gives star sapphires their special appeal. “They are really quite beautiful,” Ague said. “Those features in garnets are really only associated with really extreme temperature or pressure conditions, so right there we knew there was something special about these rocks,” Ague said. “It was a completely serendipitous discovery.”

Microscopic view of needle-like inclusions of the mineral rutile within garnet seen under crossed-polarized light. Needles and other inclusions appear bright and the garnet hosting them appears black. The needle orientations are controlled by the crystal structure of the garnet. Needles such as these are typically found only in garnets that formed at extremely high temperatures and/or pressures. The field of view is about 0.03 inches (0.75 millimeters) wide.
CREDIT: Jay Ague

The outcrops discovered so far stretch along Interstate 84 through northeast Connecticut toward the Massachusetts border. They are from the Brimfield Schist, part of the Acadian metamorphic belt. One quarry in the region uses the rock for road gravel, Ague said. Hikers along the Nipmuck Trail might also find a piece.

“The rocks are not super unique-looking, so the possibility exists that there is a lot more of this out there to find,” Ague said.

How do they get so hot?

The researchers now plan to figure out when the rocks formed — their current guess is about 400 million years ago — and what drove them to such extreme temperatures.

Their origin lies in the Acadian orogeny, when a chain of volcanic islands collided with North America.

“We can see back through all that history to unravel the earliest beginnings of how this rock formed,” Ague said. “These rocks began as basically muds on ancient ocean floors in very chilly conditions. Then they were buried and completely recrystallized up to 1,000 degrees [Celsius], and then subject to two more metamorphic and deformational events, then ultimately brought back to the surface so we can see them here today.”

Based on minerals in the gneiss, the rocks formed at a minimum depth of about 20 miles (35 km) below the surface, Ague said. Theories abound as to how to nearly melt rocks at that depth: having extremely radioactive crust radiate excess heat; a subduction zone allowing hot magma to heat the rocks; or intense mountain-building that produces thick crust, such as in the Himalayas. Another idea: Severely twisting rocks during mountain-building can produce heat, like bending a paper clip back-and-forth makes it feel warm, Ague said.

“These are all hypotheses we can test,” he said. “The nice thing is that no matter what the answer is, it’s very interesting.”