Ancient Earth may have birthed islands of life 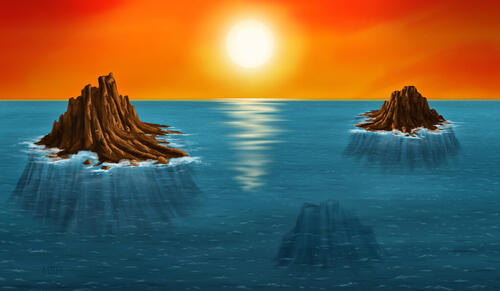 Islands jutting up from the world’s oceans provided environmental conditions necessary for early life to flourish, a new study co-authored by a Yale scientist suggests.

Significantly, the finding offers important evidence supporting one of the most popular ideas about the origins of life on Earth — Charles Darwin’s notion of “warm little ponds.”

Earth scientists Jun Korenaga of Yale University and Juan Carlos Rosas of the Ensenada Center for Scientific Research and Higher Education in Mexico describe their new theory in the Jan. 4 online edition of the journal Nature Geoscience.

In his writings, Darwin hypothesized that life began when shallow, warm ponds of water allowed essential biomolecules to concentrate and undergo polymerization reactions. Many scientists believe that if such ponds existed in abundance, or if they existed over a long period of time, it is possible that life emerged from a series of these chemical reactions.

Yet there was a problem when applying this theory. The early Earth was a “water world,” covered by deep oceans long before the first continents poked their way to the surface. In such a world, Darwin’s shallow, warm ponds simply didn’t exist.

Korenaga and Rosas say they may have the answer.

Their model found that a higher amount of internal heating in the Earth’s mantle than what exists today may have halted certain ongoing geophysical processes — creating a shallowing of ocean basins in some parts of the world. In this scenario, the researchers said, volcanic island chains and oceanic plateaus may have remained above sea level for hundreds of millions of years.

“This is a very exciting finding for solid Earth science as well as prebiotic chemistry,” said Korenaga, a professor of earth and planetary sciences at Yale.

Earth’s internal heating comes from the decay of radioactive elements such as uranium. Because these elements disappear over time, there would have been more of them during the Archeon eon. Korenaga said this would mean there was greater internal heating in the past.

“My earlier collaboration with Jeffrey Bada, a world expert on prebiotic chemistry at the Scripps Institution of Oceanography, tempted me to look into the influence of this well-known fact of sea-floor topography in the past, which had never been explored before,” Korenaga said. “Juan and I were surprised when we first saw our results, but in hindsight, it actually makes sense.”

Korenaga said he hopes the study will motivate further investigations into the dynamic nature of Earth’s early landscape and its implications for the origin and evolution of life.

Grants from NASA and the National Science Foundation supported the research.