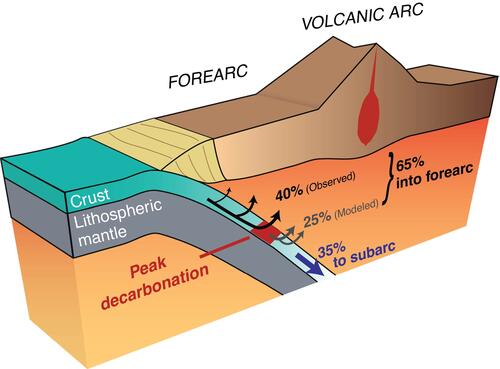 Scientists are learning more about the geological conveyor belt that hauls carbon deep into the Earth’s mantle — namely, the process of subduction, which occurs when tectonic plates meet and one plate slides under another and sinks steeply over a period of millions of years.

In a new study in Nature Communications, researchers found that much of the carbon exits the conveyor belt earlier than previously thought — at depths of about 50 to 60 kilometers. Because carbon at these depths is likely to be returned to the atmosphere via volcanoes, the Earth’s mantle may expel more carbon than it takes in via subduction over a period of millions to billions of years, the researchers say. “The deep-Earth CO2 fluxes calculated in the paper can influence the global carbon cycle on million-to-billion-year timescales,” said Jay Ague, the Henry Barnard Davis Memorial Professor of Earth and Planetary Sciences, who co-authored the study with former Yale Ph.D. student Emily Stewart, who is now at the California Institute of Technology. These emissions, however, are dwarfed by the amounts of carbon spewed into the atmosphere by human activities, Ague said.