A deep dive into the upward mobility of rocks 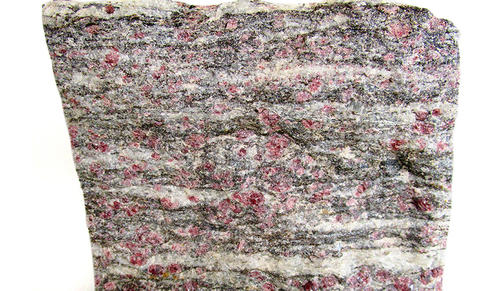 Yale geologists have identified the deepest pieces of Earth’s crust ever found in the United States or Canada — in the rolling hills of northern Connecticut.

Tiny bits of quartz and other minerals, inside garnet crystals, tell the story of a tectonic escalator ride that started 100 miles below Earth’s surface, some 400 million years ago. The discovery, described in a study in the journal Science Advances, offers new insight into the way rocks move through the Earth during the formation of mountains.

“These ultra-deep rocks give us a unique window into geological processes operating far beneath active mountain belts such as those in Japan and the Himalayas,” said senior author Jay Ague, the Henry Barnard Davis Memorial Professor of Geology and Geophysics at Yale.

“It’s just not possible to drill 100 miles below the surface to see what’s going on today,” Ague said. “But these ancient, deeply-eroded rocks provide access to Earth’s vast interior that we would never have otherwise.”

Ague and the study’s lead author, geology and geophysics graduate student Duncan Keller, studied metamorphic rocks — rocks that have been transformed by intense heat and pressure — that they collected from northern Connecticut. The grayish-brown rocks, which are speckled with pink crystals of garnet, are part of the northern end of the Appalachian Mountain belt.

Typically, the researchers said, geologists recognize rocks that come from deep underground by looking for garnet crystals that contain even tinier diamond crystals. But the Yale researchers developed a new method for spotting these rocks. 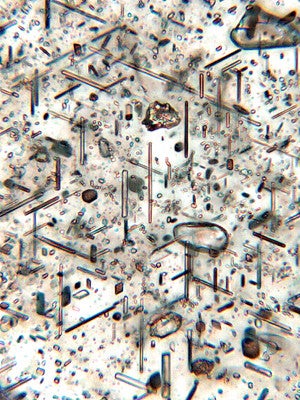 A photomicrograph of a thin section of a rock sample (Image credit: Duncan Keller)

Keller and Ague said minerals such as quartz, amphibole, and sodium phlogopite formed from chemical components of the garnet in the rocks. The minerals collected into tiny arrays of needle shapes and plate shapes, inside the garnet crystals.

“Using the chemistry and crystal structures of these needles and plates, we showed that they formed from the breakdown of a rare, ultrahigh-pressure mineral called majoritic garnet,” Keller said.

The researchers were able to calculate how deep into Earth’s interior the transformation occurred — in this instance, more than 100 miles.

Prior to this, the deepest rocks from Earth’s crust found in the United States or Canada came from about 55 miles underground. They were collected in Canada.

Yale and the National Science Foundation funded the research.