A geochemical journey from the center of the Earth 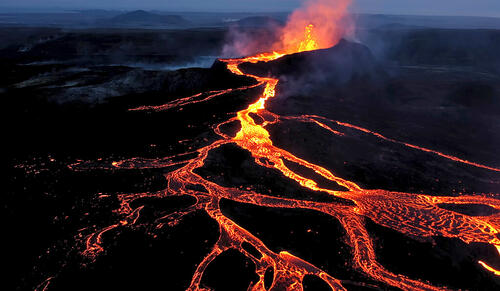 Yale researchers have a new theory to explain some of the geochemistry of “hotspots” — magma plumes from deep in the Earth that erupt at the surface.

Hawaii and Iceland are tourist hotspots — and it turns out they’re popular with geochemical travelers as well.

A new Yale study suggests that throughout Earth’s history, natural processes propelled measurable geochemical signals from deep inside Earth’s metallic core, up through its thick, middle layer, and all the way to the surface, emerging at what are known as magma “hotspots.”

The new theory could answer longstanding questions about the nature of these hotspots, which help create some of the most beautiful places on Earth.

Hotspots, which are plumes of magma that come from deep inside the Earth and erupt at the surface, have helped form large, volcanic islands such as Hawaii and Iceland.

“Magma hotspots are home to some of the most unique geochemistry found on the Earth’s surface,” said Amy Ferrick, lead author of a new study in the journal Proceedings of the National Academy of Science. She is a graduate student in Yale’s Department of Earth and Planetary Sciences and a member of the lab of Jun Korenaga, a professor of Earth and planetary sciences in Yale’s Faculty of Arts and Sciences.

“Where hotspots come from, and what makes magma hotspots so unique is not fully understood, but studying their geochemistry can give us clues,” Ferrick said. 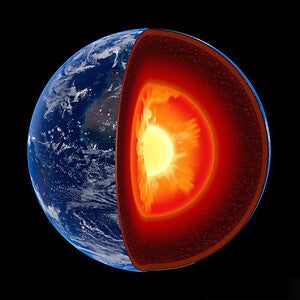 Tungsten and helium isotopes found at Earth’s surface may originate in Earth’s core, shown in this cross-section of Earth’s interior.

One of those clues involves isotopes of tungsten and helium found in crystallized magmas at these hotspots. Isotopes are two or more types of an atom with the same atomic number but different numbers of neutrons.

At magma hotspots, the ratios of tungsten and helium isotopes are inconsistent with their ratios within Earth’s rocky, middle layer, known as the mantle. Rather, the ratios are consistent with isotopes found much deeper — at the planet’s tungsten-rich, metallic core.

Traditionally, the scientific community has explained these isotope ratios, especially the helium isotope ratio, by suggesting that some rocks from Earth’s middle layer simply had never been exposed to the surface, where helium and other gases escape into the atmosphere.

But there is a problem with that notion, Ferrick and Korenaga noted: Earth’s mantle convection processes are so vigorous — and were particularly so during Earth’s early years, when it was hotter and partially molten — that it is highly unlikely helium could be trapped in reservoirs originating in the mantle.

For the new study, Ferrick and Korenaga developed a computer model showing how the tungsten and helium isotopes could make the journey from the center of the Earth. They posit that isotopic diffusion, the movement of atoms within a material based on temperature and the size of the particles being moved, can create something of a hotspot highway.

“I initially thought that diffusion might be too slow to be effective, so I was surprised when Amy showed that this process was more than sufficient to explain the anomalous tungsten and helium compositions of ocean island basalts,” Korenaga said.

The research has far-reaching implications for understanding early Earth conditions such as the extent of magma oceans. It also may help scientists understand the evolution of areas in Earth’s interior that have been hidden from view for billions of years.

The research was supported, in part, by the National Science Foundation.