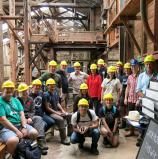 During August, a group of 17 G&G students and faculty visited the British Isles to take in the varied geology. Led by Professor Mark Brandon and graduate students Ross Anderson and Chris Thissen, the group journeyed some 3,182 miles from Cornwall to Northern Scotland through nearly 3 billion years of Earth’s history.

For the paleontologists highlights included walking the famed Ammonite Pavement along England’s Jurassic Coast, seeing some of the oldest Ediacaran fauna at Charnwood Forest, marveling at the pyritization of fossils during a Jurassic ocean anoxic event, and seeing some of the oldest vestiges of life in the form of Proterozoic stromatolites and eukaryotic testate amoebae.

Geochemists and climate scientists got to see periods of global ocean anoxia at the coastal town of Whitby, evidence of Neoproterozoic snowball Earth events in the Scottish Dalradian Supergroup associated with huge carbon isotopic excursions, and evidence of the last glacial maximum in the form of glacially eroded landscapes.

Structural geologists enjoyed the impressive chevron folds at Millook Haven in Cornwall, got the chance to see the Moine Thrust (the first thrust fault to be mapped) in the Assynt region of northern Scotland, and were able to puzzle over the Anglesey Mélange.

Geophysicists were not disappointed either. They had the opportunity to see two ophiolite complexes, one on the Lizard Peninsula and one in southwest Scotland. They also saw evidence marshaled by James Hutton of the ability of igneous rocks to intrude older strata at Arthur’s Seat, Edinburgh.

Economic geologists saw the historically important tin mines of Cornwall, which have been active since at least the Roman times. The group was also treated to a train ride down a Welsh slate quarry to hear about the industry. We also saw traces of the North Sea oil/gas industry at the British Geological Survey’s core sheds.

A central theme of the trip was the history of geological thought. To this end the group visited sites where the pioneers described the first evidence of the theories that now dominate the field. These included Hutton’s famed unconformities at Siccar Point and Jedburgh and the rocks at Stonehaven, Scotland where Thomas Barrow worked on his metamorphic sequence. The group marveled at the mapping abilities of Peach and Horne in northwest Scotland, and saw evidence of widespread ice ages as presented by Darwin and later Agassiz at the Parallel Roads of Glen Roy.

Students were also able to sample the culture of the British Isles. Visits were made to Stonehenge, Chesters Roman Fort on Hadrian’s Wall, the Royal Edinburgh Military Tattoo, Uquhart Castle on the banks of Loch Ness, and the Bunnahabhain whisky distillery on Islay. The trip even concluded with a guided tour of Number 10 Downing Street, the residence and office of the British Prime Minister.

The students returned after two weeks of camaraderie with a unique insight into some of the most historically important rock sequences in the world. They also returned a little wetter thanks to the glorious British summer!