Going with the grains to explain a fundamental tectonic force 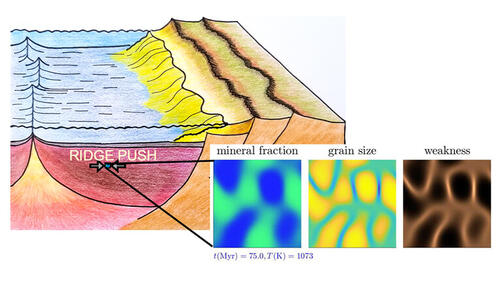 A new study suggests that tiny, mineral grains — squeezed and mixed over millions of years — set in motion the chain of events that plunge massive tectonic plates deep into the Earth’s interior.

The theory, proposed by Yale scientists David Bercovici and Elvira Mulyukova, may provide an origin story for subduction, one of the most fundamental forces responsible for the dynamic nature of the planet.

The study appears in the Proceedings of the National Academy of Sciences.

Subduction occurs when one tectonic plate slides underneath another plate and then sinks into the Earth’s mantle. Its role in major geological processes is immense: It is the main engine for tectonic motion. It builds mountains, triggers earthquakes, forms volcanoes, and drives the geologic carbon cycle.

Yet researchers have been uncertain about what initiates subduction.

“Why Earth even has subduction, unlike other terrestrial planets as far as we know, is a mystery,” said Bercovici, Yale’s Frederick William Beinecke Professor and chair of Earth and Planetary Sciences.

“Mantle rock near the surface that has cooled for hundreds of millions of years has two competing effects,” he said. “While it’s gotten colder and heavier and wants to sink, it’s also gotten stiffer and doesn’t want to sink. The stiffening effect should win out, as it does on most planets, but on Earth, for some reason, it doesn’t.”

According to the theoretical model developed by Bercovici and Mulyukova, a research scientist at Yale, subduction may initiate at the margins between Earth’s sea floor and continents.

The model shows that tectonic stresses in an oceanic plate cause its mineral grains to mix with each other, become damaged, and eventually shrink. Over a period of approximately 100 million years, this process weakens the oceanic plate and makes it susceptible to vertical shear and bending — which are associated with the start of subduction.

“The real bottleneck for tectonic plate activity on a terrestrial planet is how fast its massive, rocky layers can deform,” said Mulyukova. “The rocks can deform only as fast as their tiny mineral grains allow. Our model explains how these changes in mineral grains can dramatically weaken the rock and make subduction possible on a planet like Earth.”

This research was supported by a grant from the National Science Foundation.