Hail to the squid — A vampyropod fit for a president 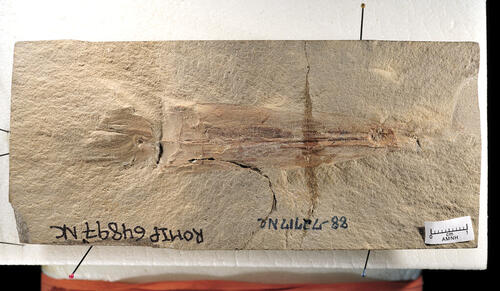 Researchers at Yale and the American Museum of Natural History have identified the earliest known relative of octopuses and vampire squid — and named it after the 46th president of the United States.

Syllipsimopodi bideni had 10 arms, fins, and rows of suckers to grasp prey. It lived 328 million years ago and represents a new species of vampyropod, the group of marine animals that includes modern octopuses and vampire squid.

The researchers named the animal after President Joseph R. Biden to honor the new president, who had just been inaugurated at the time the study was submitted for publication, and to recognize his commitment to science.

But the presidential name is just one part of the animal’s significance.

“Our findings suggest that the earliest vampyropods, at least superficially, resembled squids that are living today,” said Christopher Whalen, a National Science Foundation postdoctoral fellow in Yale’s Department of Earth & Planetary Sciences and at the American Museum of Natural History.

Whalen is lead author of a study in the journal Nature Communications about the discovery.

“Syllipsimopodi bideni also challenges the predominant arguments for vampyropod origins and offers a new model for the evolution of internally-shelled cephalopods,” he said.

Whalen and co-author Neil Landman of the American Museum of Natural History made the identification from a specimen originally discovered in central Montana, which is now part of the collection of the Royal Ontario Museum.

Syllipsimopodi bideni extends the fossil record for vampyropods by nearly 82 million years. It is the only known vampyropod to have 10 functional arms. By contrast, octopods have eight arms, and modern vampire squid have eight arms and two filaments. Other modern squids and cuttlefish have 10 arms.

Early vampyropods such as Syllipsimopodi bideni also possessed a piece of anatomy called a gladius — the flattened, semitransparent remnant of an internal shell.

“Today, only squids and their relatives, and vampire squid, have a gladius,” Whalen said. “Octopods have reduced it to a fin support or stylets, which are small, hard, bar-shaped structures.”

Whalen said Syllipsimopodi bideni had a torpedo-shaped body. Its fins were large enough to perhaps function as stabilizers and to help it swim. One pair of its arms was considerably longer than the other four pairs, similar to the two elongated tentacles of modern squids. The researchers speculate that Syllipsimopodi bideni used its longer arms to capture prey — smaller, shelled animals, perhaps — and its shorter arms to confine and manipulate prey.

As for why the researchers named the animal after Biden, Whalen said the publication was accepted soon after the president’s inauguration and the Jan. 6 insurrection at the Capitol.

“I wanted to somehow acknowledge the moment in a way that was more positive and forward-looking,” he said.

“I was encouraged by the plans President Biden put forward to counter anthropogenic climate change, and his general sentiment that politicians should listen to scientists,” Whalen added.

Grants from the National Science Foundation’s Postdoctoral Research Fellowship in Biology Program and the Paleontological Society funded the research.