How to store CO2 without causing an earthquake 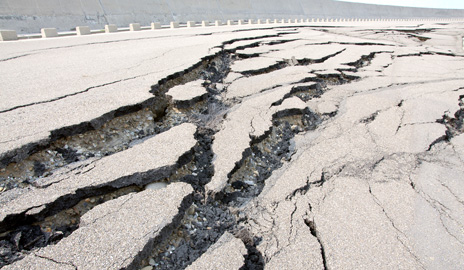 Storing carbon dioxide underground can be done in a way that minimizes and perhaps eliminates related earthquake risk, according to new research by Yale University scientists.

One way of reducing high levels of atmospheric CO2, a major cause of global warming, involves storing it underground by a process called carbon sequestration. This involves injecting fluid CO2 into subterranean cavities, which some scientists believe can lead to earthquakes.

But in a new paper published online March 14 in Geophysical Research Letters, the Yale scientists present a model showing that storage of CO2 in a specific type of volcanic rock — reactive mafic rock, the most ubiquitous on Earth’s surface — may be among the safest options for effective carbon storage. (Hawaiian lavas are an example of mafic rocks.)

“Recent studies casting doubt on the safety of CO2 sequestration could potentially stall or even end development of related technologies,” said Yale researcher and lead author Viktoriya Yarushina. “But these studies did not adequately consider mineral carbon storage. CO2 sequestration via mineral trapping not only provides permanent storage, but can also eliminate deleterious side effects endemic to other sequestration methods. Our model is simple and, in its simplicity, robust.”

In common mineral carbon sequestration, fluid carbon is injected into saline aquifers and depleted oil or gas reservoirs, which exist mainly in non-reactive rock. There the CO2 fluid seeps into rock pores and pockets. Under high pressure it can escape, pushing open faults or prying apart minerals, reducing friction. This makes it easier for faults to slip and rocks to fail, especially if they are already under the type of tectonic stresses that naturally drive earthquakes.

However, when CO2 is stored underground through chemical reactions with mafic (reactive) rock, the process generates carbonate minerals and helps counter the conditions that lead to earthquakes. The researchers’ model describes the effect and helps predict the evolution of stresses that can induce earthquakes. The model also helps assess whether an earthquake trigger can be delayed or avoided.

“Our model shows that these new minerals can reduce the effect of fluid pressures and reduce or even eliminate earthquake risk,” said principal investigator Dave Bercovici, Frederick William Beinecke Professor of Geophysics at Yale. “Not only do the new carbonate minerals safely store CO2, but they possibly have the added benefit of reducing fluid pore pressure and distributing the stress at the injection site, both of which mitigate seismic risk.”

The paper is titled “Mineral carbon sequestration and induced seismicity.”

The U.S. Department of Energy provided support for the research.