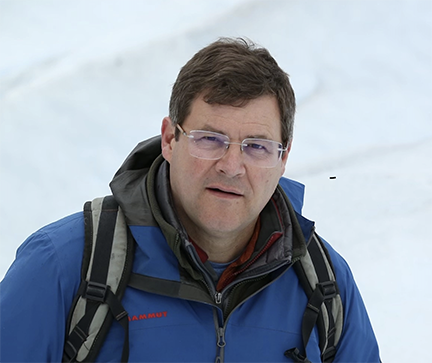 Johnson, one of Yale’s four annual Wilbur Cross Medal recipients, is now Sant Director at the Smithsonian’s National Museum of Natural History. He spoke to the News about baby bees, the extinction of the dinosaurs and the climate crisis.

When he picked up the phone, Kirk Johnson GRD ’89 was in the middle of the Smithsonian Museum’s staff Halloween party. Naturally, he began the conversation with a detailed description of the different bugs his coworkers were dressed up as.

Johnson, the Sant Director of the Smithsonian’s National Museum of Natural History, is a recipient of a Wilbur Cross Medal, one of four awarded yearly by the Graduate School of Arts and Sciences to outstanding alumni. Johnson was recognized for “contributions on fossil research and dedication to public education and science programs.”

Even over the phone, Johnson’s love for the museum was clear as day, his voice strengthening as he described his job at the world’s largest complex of collections.

“The rewarding thing is that I feel every day that I’m doing a job that really matters to people and to the future,” Johnson said.

Johnson is a scientist, paleontologist and museum administrator — and, when he has the time, a fossil-themed picture book author. He graduated from Amherst College with a dual degree in geology and fine arts. Afterward, he earned a master’s from the University of Pennsylvania in geology and paleobotany before receiving his Ph.D. at Yale in the same two subjects.

A self-described “museum-loving kid,” Johnson has gravitated towards the institutions for as long as he can remember.  From 1991 to 2012, he worked at the Denver Museum of Nature and Science. Then, he was chosen to lead the National Museum of Natural History in Washington, D.C.

Johnson’s day-to-day agenda can range from board meetings to publishing scientific papers and to attending United Nations climate change meetings in Egypt, Montreal and Madrid. Efforts to respond to the climate crisis, Johnson said, rely heavily on the archival collections and research capabilities that museums possess.

His role at the UN’s Framework Convention on Climate Change conferences is to help policymakers and scientists gain the information they need to think about changing the future and to demonstrate the interlocking nature of the climate and biodiversity crises.

“We’re sort of the only place that preserves a record of the planet’s history,” Johnson explained. “To the extent that bio-organisms document attributes of ancient ecosystems, they certainly document ancient climates.”

There are only about 120 large history museums in the world; the 176-year-old Smithsonian looms large among them. Thanks in part to conferences like the ones Johnson attends, museums are cooperating more frequently and bringing together thinkers and resources to face the climate and biodiversity crises.

Johnson believes that one of the most important aspects of museums is their accessibility.

“It’s important to know what the public thinks and feels because that’s where the change happens,”  Johnson said. “Museums … have access to a large public audience. Most policy makers don’t.”

GSAS Dean Lynn Cooley described Johnson as “an exceptional science communicator” who has brought “critical scholarly discourse into the public realm … a shining example of what can be done to improve the world with a Yale Ph.D.”

On the role of museums as disseminators of information, Johnson noted the psychological side of his job.

“A lot of people … are anxious; some are just depressed,” he admitted. “I just don’t think that pessimism solves problems. I think that problems are solved by people who think that solutions are possible.”

His goals may be lofty — he announced with gusto that if we can pull together our “collective will,” we can resolve climate issues “in a positive way” — but Johnson is no stranger to getting into the thick of things. In fact, he is a fan.

Asked to describe an anecdote from his time at Yale, Johnson casually dove into his version of a college-glory-days tale.

Walking through the woods of Connecticut, Johnson found himself curious as to the leaves he saw littering the forest floor. Did they represent the forest’s makeup? How many leaves might a tree even have?

Johnson recounted how he calculated that there should be 102,000 leaves per tree on average. He grabbed an acquiescent friend, chopped a tree down in North Haven, and spent 18 hours testing his calculations.

“99,284 leaves,” Johnson recited like the number has lived in his head for the last 30 years (it has). His predictions were correct within about a three-percent margin of error.

Undoubtedly, Johnson is a bit of a nerd — which one would hope for in the man in charge of one of America’s biggest nerd heavens. And as with any nerd, he has passions that might sound tedious to others.

The “longest period of sustained joy” in his life, Johnson described, was a 70-day fossil dig in Snowmass Village, Colorado, in 2010. Over the period, Johnson and his team found roughly five thousand bones from around 50 mastodons and mammoths.

“My true love is discovering incredible fossils,” he explained. “That’s what makes paleontology so cool — every once in a while you find something no one’s ever seen before.”

He nurtured his love of fossils while getting his Ph.D. He laid out his thesis project, which he was set on upon his arrival in New Haven, in layman’s terms as: “what happened to the plants when the dinosaurs went extinct?”

Johnson gleefully recounted how his faculty advisor, then-Peabody Museum director Leo Hickey, was convinced the asteroid which had killed the dinosaurs had little impact on plant life on the planet. Johnson challenged his beliefs by analyzing fossilized earth in Montana and North Dakota.

“He wasn’t threatened by the fact that I’d made this discovery; in fact, he embraced it,” Johnson recalled.  “How rare is it to have people who are experts do a 180 and change their mind?”

Johnson hinted that it was not just Professor Hickey whom he surprised with his discovery — he was being modest. Jia Chen GRD ’00, chair of the Graduate School Alumni Association Board, explained that Johnson’s work “challenged conventional wisdom and revealed crucial aspects of the Cretaceous-Paleogene mass extinction, one of the most important events in Earth’s history.”

Johnson laughs when asked what advice he has for current Yalies.

“[Yale’s] such a smorgasbord of wonder,” he instructed.  “I think back about there and … the things that I could’ve, should’ve, would’ve done.”

His advice can be summarized as such: meet interesting people, stay humble and follow your passions. Take the time to appreciate being here — you have no idea what an amazing place it is until long after you are gone.

But what, perchance, is the favorite exhibit of a man who has spent his entire career in museums?

“A director’s not supposed to say they have favorites,” he said conspiratorially. “I do.”

The answer: the Smithsonian’s Bone Hall. Johnson’s voice swelled as he described the cornucopia of skeletons he presides over.

“You walk through it,” he noted in a closing anecdote that seems to apply to the reverence he holds for museums as a whole, “[And] you realize how wonderful and weird and beautiful the natural world really is.”

Kirk Johnson was awarded the Wilbur Cross Medal on October 14, 2022.

Correction, Nov. 1: An earlier version of this story misstated date Dr. Johnson was awarded the prize.

MIRANDA WOLLEN
Miranda Wollen covers the Graduate School of Arts and Sciences and the Law School for the News; she also writes very silly pieces for the WKND. She is a sophomore in Silliman College double majoring in English and Classics.
External link:
https://yaledailynews.com/blog/2022/11/01/profile-kirk-johnson-grd-89-the-museum...