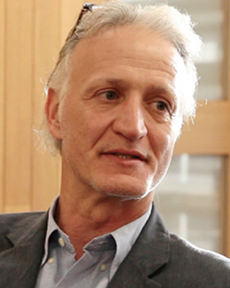 I write with great sadness to let you know that Mark Pagani, Professor of Geology and Geophysics, has passed away after a courageous battle with cancer. He was surrounded by the love of his family when he left this world, and we send out our deepest condolences to them during this time of such great loss.

Mark got his B.A. degree at the University of Colorado, Boulder, and his Ph.D. at Penn State. He was a Postdoctoral Researcher and Research Fellow at UC Santa Cruz for a number of years before joining the Yale faculty as an Assistant Professor in 2002.

And he has the distinction of being probably the only geochemist who was a professional rock musician before he came to the field.

Mark was a pioneer in organic geochemistry, leading the way in using isotopic proxies to better understand climate and climate variations back through Earth’s long history. Some of his group’s accomplishments include reconstruction of Earth’s atmospheric carbon dioxide content over the past 60 million years, unraveling the drivers of extreme climate variations such as the Paleocene-Eocene thermal maximum, and deducing ancient temporal and spatial variations in sea surface temperatures and how they relate to climate phenomena such as El Nino and La Nina. For these and many other groundbreaking contributions, Mark was honored as a Kavli Fellow and as a Fellow of the American Geophysical Union.

One of Mark’s great themes was that if we are to come to grips with anthropogenic climate change today, we need to understand natural processes and how they have influenced climate variability in the past. With his estimates of atmospheric carbon dioxide across geologic time, he argued that the levels we experience today are similar to those about 4 million years ago, when there was little to no ice on Greenland and sea level was some 65 feet higher than now. And if things continue as they are, sometime in the next century carbon dioxide levels will be similar to what they were around 50 million years ago, when there was little or no polar ice, sea level was over 200 feet higher than today, and crocodiles lived comfortably in polar regions. His thought-provoking op-ed on these issues in CNN online is well worth reading.

Mark was a highly engaged teacher, mentor, and member of the scientific community. He served as the Director of Graduate Studies in G&G, productively restructuring the way advising committees interact with Ph.D. students in the years following the qualifying exam. He played a fundamental role in the creation of the Yale Climate and Energy Institute, and served as the Institute’s Director from 2012-15. He was an inspirational mentor and advisor to a wide spectrum of undergraduates, Ph.D. students, and postdocs who have now gone on to forge distinguished careers of their own. He served on many national and international scientific committees, and was a frequent organizer and Chair of geochemical sessions at conferences across the globe.

When Mark first arrived in the department, his office was down the hall from mine. And I quickly realized that he liked music. Loud music. Really loud music. One time he was playing “Black Dog” from Led Zeppelin IV so loudly that the pencils were rattling on my desk. We had similar tastes in music and it was fascinating to learn of people in the Boston music scene that he was once a part of, including Mark Sandman, another creative genius who left far too soon.

But early on, as my pencils were rattling, I confess that I remember thinking to myself: “What did we get ourselves into by hiring this guy?” Well, what we got was unquestionably a visionary leader in paleoclimate research—at the top of the field worldwide. And quite a personality too. He was frank. Sometimes abrasively so (well, maybe more than just sometimes…). But his honesty and unvarnished sense of humor were refreshing. He was a loyal friend who would stick by you in the good times, and the bad. He cared deeply about his family and loved talking about what his kids were up to. There was true joy in his eyes when he spoke of them. These were all facets of his personality honed on the streets of New York City where he grew up, and were part of what made him unforgettable.

I am from the Midwest. Detroit actually. We don’t hug each other too much there. But with Mark it was a different story. When really good things happened, or really bad things, Mark and I would clasp hands and put our arms around each other’s shoulders. We didn’t have to say anything. We just knew.

G&G has now lost three great geochemists in about as many years—Karl Turekian, Bob Berner, and now Mark. We must and will rebuild. And as we do so, we will keep the examples that these luminaries set for us foremost in our minds.

Mark’s time was cut short, but he accomplished more than most ever will. Rock on.