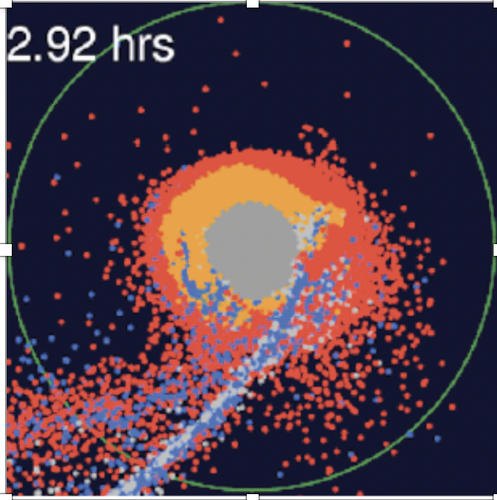 A giant impact model has been a standard model to explain the origin of the Moon. However, the validity of this model has been questioned due to the failure of many models to explain very close isotopic compositions of the Moon and those of Earth that have been revealed by recent high-precision measurements. Many scientists started to propose models where highly questionable assumptions are made on the conditions of collision, or some scientists even suggested that most of materials in the inner solar system have nearly identical isotopic compositions. Seeing this confusion in the community, Jay Melosh, a leading planetary scientist in Purdue University, called it as “the Moon’s isotopic crisis”.

In a recent paper published in Nature Geoscience (https://www.nature.com/articles/s41561-019-0354-2.pdf; see also https://www.nature.com/articles/s41561-019-0364-0.pdf), a Yale geophysicist Shun Karato and his colleagues in Japan showed that this crisis may be rescued if two new ingredients are added to the Moon formation model. One is based on a work by Karato and his former student Zhicheng Jing at Yale who developed a model for a complex liquids that explains why compressional behavior of silicate melts are so different from that of silicate minerals. Another is a work by a group in Japan (Tokyo Institute of Technology and RIKEN) who showed that a commonly used computer code to simulate giant impacts (the SPH code) has a physically unreasonable approximation.

In this new paper, Karato and his co-workers used this new model of silicate melts and simulated giant impacts using a modified code. They showed that upon a collision, magma ocean materials on a growing Earth are heated much more than solid impactor materials and consequently magma ocean materials from Earth are ejected efficiently to form the Moon. In this model, there is no need to invoke ad hoc assumptions on the conditions for collision nor to propose an unproven hypothesis that all inner solar system materials have the very similar isotopic composition. We can make the Moon as observed quite naturally, in this model.