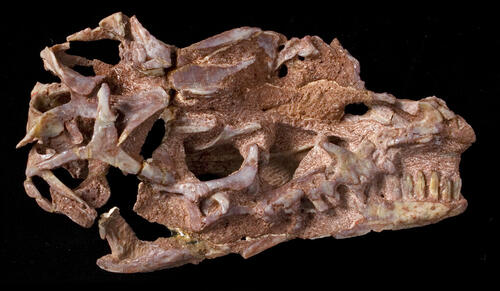 It was always going to be a big lift, piecing together the story of how sauropods — the long-necked, lumbering giants of the dinosaur world — developed their remarkable, box-like heads.

But Yale paleontologists have done just that. They say their findings add crucial information about the origins of some of the world’s best-known dinosaurs.

Sauropods, named by pioneering Yale paleontologist O.C. Marsh in 1878, originated in the late Triassic period and roamed across the globe by the late Jurassic period, 150 million years ago. These plant-eating creatures included Brontosaurus, Apatosaurus, and Brachiosaurus.

Yet as recognizable as sauropods were — with their long tails, long necks, and tree trunk-sized legs — many aspects of their development have remained unexplained.

“Every part of the sauropod body is enormously modified, compared to other dinosaurs. Their skulls are no different. But no one had parsed out fully how and when those skull modifications happened,” said Yale paleontologist Bhart-Anjan Bhullar, senior author of a study in the journal Evolution. Bhullar is an assistant professor in the Department of Earth and Planetary Sciences and assistant curator at the Yale Peabody Museum of Natural History.

It is well known that sauropods had an unusual skull — which featured an elongated face, nostrils that migrated up to the top of their head, and an occiput (the back part of the skull) that rotated to overlap with its eye sockets. There are several hypotheses for why this was. The primary theory is that sauropods’ specialized feeding habits put a premium on being able to reach both lofty leaves and plants that were on the ground.

However, a lack of fossils representing sauropod species at different ages has made it difficult to confirm this theory.

“To study the evolution of ontogeny — the growth of an individual from birth through adulthood — and its role in morphological innovation through time, multiple individuals of different ages are needed to understand how developmental changes happen within species and among species in an evolutionary framework,” said first author Matteo Fabbri, a doctoral student in the Department of Earth and Planetary Sciences.

The researchers used micro-CT scanning to create three-dimensional models of a variety of sauropod skulls — including two skulls of the ancient, sauropod precursor species Anchisaurus that were discovered, by Marsh, in Connecticut during the 19th century and placed in the permanent collection of the Peabody Museum.

The analysis turned up something unexpected. By examining skulls of both juvenile and adult dinosaurs, the researchers found that as new species of sauropods developed — and their massive features became more pronounced — the cranial features necessary to support such developments came along earlier and earlier in the sauropods’ lives.

In the species Anchisaurus, for example, researchers found that the juveniles of the species resembled earlier dinosaurs and developed their unique skull features as adults. But by the time later species emerged, those cranial features were found in embryos and juveniles.

Added Bhullar: “It’s a key, missing component in our understanding of how these massive, elongated creatures came to be.

“It also is a rare demonstration of the way in which changes in developmental timing break constraints and allow the evolution of extremes of form and function — in these, perhaps the most extreme of all land animals.”

Co-authors of the study were Nicolas Mongiardino Koch, Michael Hanson, and Holger Petermann of Yale and Guillermo Navalon of the University of Oxford.