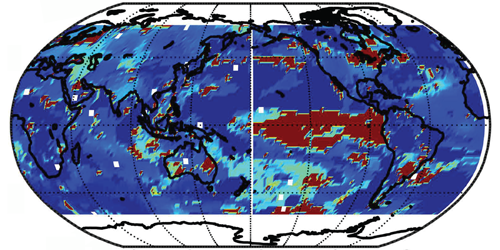 Temperatures on Earth’s surface exhibit “pink noise”—a finding that could explain the global warming hiatus in the first decade of this century.

Electronic currents, star luminosities, and brain signals are known to exhibit a type of noise in which each frequency octave carries the same amount of energy. Such noise is called pink because that would be the color of visible light with such an energy spectrum. John Wettlaufer and co-workers at Yale University and Stockholm University have now found pink noise in the evolution of Earth’s surface temperatures and other climate variables on decadal timescales. The researchers showed that such noise is due to natural processes unrelated to emissions produced by humans. The finding may help researchers understand how this noise can interact with human-generated greenhouse gases to change our planet’s climate.

The authors analyzed two types of datasets. The first, provided by the Goddard Institute for Space Studies, contained monthly-averaged surface temperatures from 1901 to 2012. The second dataset, derived from isotope measurements of ice cores and cave formations, provided a preindustrial temperature record dating back more than 100,000 years. Using a method from statistical physics known as multifractal analysis, the team found that the temperature data contained fluctuations that could be described as pink noise. Because pink-noise features were observed in both the pre- and the postindustrial datasets, the authors concluded that such noise must be caused by natural processes, whose nature has yet to be deciphered.

The team suggests that pink noise could be behind an apparent hiatus in global warming observed between 2001 and 2010: this noise could have interacted with the temperature change driven by greenhouse emissions, resulting in the temporary slowdown of the observed warming trend. By accounting for the interplay of pink noise with warming due to human activities, the researchers hope to improve the reliability of climate models.

This research is published in Physical Review Letters