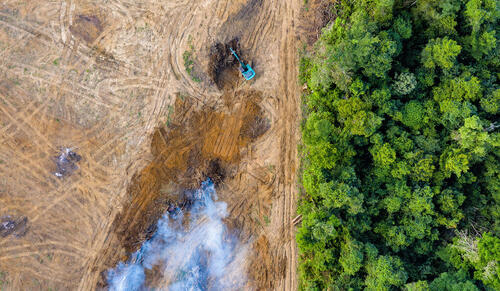 Researchers at Yale and Princeton say the scientific community sorely needs a new way to compare the cascading effects of ecosystem loss due to human-induced environmental change to major crises of the past.

For too long, scientists have relied upon metrics that compare current rates of species loss with those characterizing mass extinctions in the distant past, according to Pincelli Hull, an assistant professor of Earth and planetary sciences at Yale, and Christopher Spalding, an astrophysicist at Princeton.

The result has been projections of extinction rates in the next few decades that are on the order of a hundred times higher than anything observed in the last few million years of the fossil record.

“The problem with using extinction rates this way is that their assessment is riddled with uncertainty,” said Hull, who has conducted extensive research on mass extinctions of marine life in the ancient world. “We need a better thermometer for biodiversity crises.”

Furthermore, the researchers said, mass extinction predictions do not fully convey the severity of damage done to an ecosystem when species are depleted but not entirely wiped out.

In a new study in the journal Proceedings of the Royal Society B, Spalding and Hull point out deep flaws in the way mass extinctions are being projected and propose a new model for assessing biodiversity loss.

Part of the problem, they said, has to do with comparing extinctions found in the fossil record over millions of years with human-influenced extinctions from only the past century. Mass extinctions in the ancient world were typically characterized by “pulses” of extinctions, preceded and followed by quieter periods; the longer time frame reduces the historic average because it includes the surrounding quiet periods.

“It’s difficult to confidently deduce whether today’s rates are objectively higher than those of the fossil record,” Spalding said. “Meanwhile, we know that ecosystems may be totally decimated, yet suffer very few extinctions. In that sense, extinction rates may even underestimate our influence upon the biosphere.”

Spalding and Hull took pains to describe the perilous state of the natural world today, beyond the numbers of species extinctions. According to an Intergovernmental Science-Policy Platform on Biodiversity and Ecosystem Services (IPBES) report in 2019, nearly 75% of all freshwater resources on Earth are used by crop and livestock production; human activities have significantly altered 75% of all ice-free terrestrial environments and 66% of marine environments.

Spalding and Hull’s proposal is to change the metric from species loss to changes in the rocks beneath their feet.

“Humans change the rock record as soon as they enter an area, whether it is agrarian societies, beaver trapping, or the damming of rivers,” Hull said. “We completely change the way the Earth forms itself and this can be seen in the rocks left behind.”

The researchers said a variety of measurable metrics — such as the chemical composition of sediments and grains of rocks — are more readably comparable to ancient timescales.

“Historical comparisons offer the hope that we might begin to understand the relative scope and the eventual ramifications of our modification of the biosphere,” Spalding said. “If we think these comparisons are important, we need to get them right.”