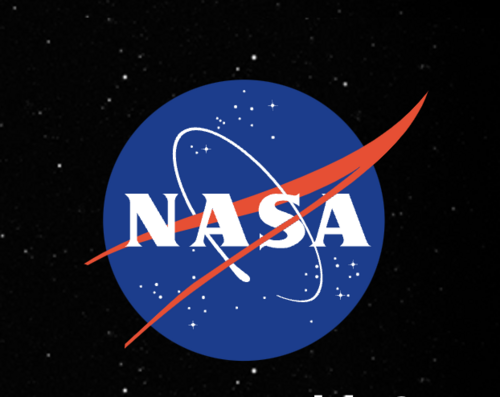 Editor’s Note: This post highlights data from Webb science in progress, which has not yet been through the peer-review process.

On the morning of Saturday, Nov. 5, an international team of planetary scientists woke up with great delight to the first Webb images of Saturn’s largest moon, Titan. Here, Principal Investigator Conor Nixon and others on the Guaranteed Time Observation (GTO) program 1251 team using Webb to investigate Titan’s atmosphere and climate describe their initial reactions to seeing the data.

Titan is the only moon in the solar system with a dense atmosphere, and it is also the only planetary body other than Earth that currently has rivers, lakes, and seas. Unlike Earth, however, the liquid on Titan’s surface is composed of hydrocarbons including methane and ethane, not water. Its atmosphere is filled with thick haze that obscures visible light reflecting off the surface.

We had waited for years to use Webb’s infrared vision to study Titan’s atmosphere, including its fascinating weather patterns and gaseous composition, and also see through the haze to study albedo features (bright and dark patches) on the surface. Titan’s atmosphere is incredibly interesting, not only due to its methane clouds and storms, but also because of what it can tell us about Titan’s past and future – including whether it always had an atmosphere. We were absolutely delighted with the initial results.

Team member Sebastien Rodriguez from the Universite Paris Cité was the first to see the new images, and alerted the rest of us via email: “What a wake-up this morning (Paris time)! Lots of alerts in my mailbox! I went directly to my computer and started at once to download the data. At first glance, it is simply extraordinary! I think we’re seeing a cloud!” Webb Solar System GTO Project Lead Heidi Hammel, from the Association of Universities for Research in Astronomy (AURA), had a similar reaction: “Fantastic! Love seeing the cloud and the obvious albedo markings. So looking forward to the spectra! Congrats, all!!! Thank you!”

Thus began a day of frantic activity. By comparing different images captured by Webb’s Near-Infrared Camera (NIRCam), we soon confirmed that a bright spot visible in Titan’s northern hemisphere was in fact a large cloud. Not long after, we noticed a second cloud. Detecting clouds is exciting because it validates long-held predictions from computer models about Titan’s climate, that clouds would form readily in the mid-northern hemisphere during its late summertime when the surface is warmed by the Sun. 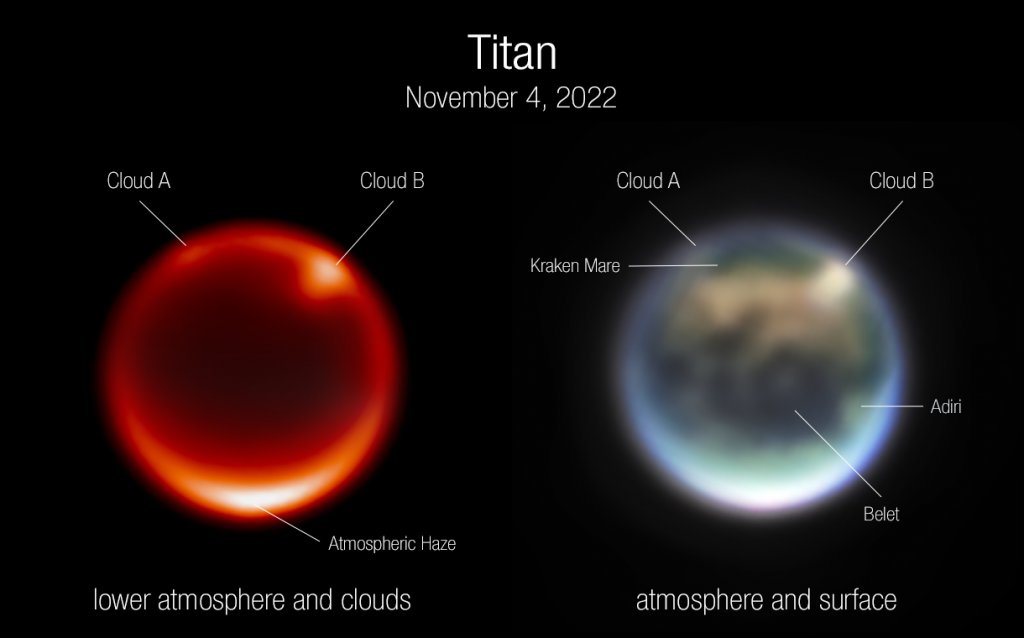 We then realized it was important to find out if the clouds were moving or changing shape, which might reveal information about the air flow in Titan’s atmosphere. So we quickly reached out to colleagues to request follow-up observations using the Keck Observatory in Hawai’i that evening. Our Webb Titan team lead Conor Nixon from NASA’s Goddard Space Flight Center wrote to Imke de Pater at University of California, Berkeley, and Katherine de Kleer at Caltech, who have extensive experience using Keck: “We just received our first images of Titan from Webb, taken last night. Very exciting! There appears to be a large cloud, we believe over the northern polar region near Kraken Mare. We were wondering about a quick response follow-up observation on Keck to see any evolution in the cloud?”

After negotiations with the Keck staff and observers who had already been scheduled to use the telescope that evening, Imke and Katherine quickly queued up a set of observations. The goal was to probe Titan from its stratosphere to surface, to try to catch the clouds we saw with Webb. The observations were a success! Imke de Pater commented: “We were concerned that the clouds would be gone when we looked at Titan two days later with Keck, but to our delight there were clouds at the same positions, looking like they had changed in shape.” 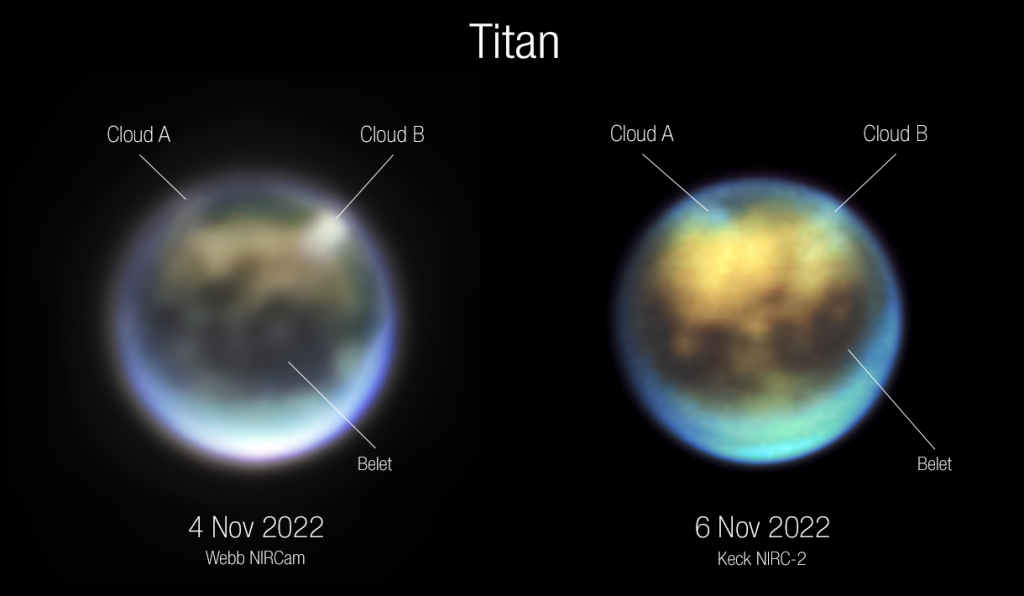 Evolution of clouds on Titan over 30 hours between Nov. 4 and Nov. 6, 2022, as seen by Webb NIRCam (left) and Keck NIRC-2 (right). Titan’s trailing hemisphere seen here is rotating from left (dawn) to right (evening) as seen from Earth and the Sun. Cloud A appears to be rotating into view while Cloud B appears to be either dissipating or moving behind Titan’s limb (around toward the hemisphere facing away from us). Clouds are not long-lasting on Titan or Earth, so those seen on Nov. 4 may not be the same as those seen on Nov. 6. The NIRCam image used the following filters: Blue=F140M (1.40 microns), Green=F150W (1.50 microns), Red=F200W (1.99 microns), Brightness=F210M (2.09 microns). The Keck NIRC-2 image used: Red=He1b (2.06 microns), Green=Kp (2.12 microns), Blue=H2 1-0 (2.13 microns). Download the full-resolution version from the Space Telescope Science Institute . Image credit: NASA, ESA, CSA, W. M. Keck Observatory, A. Pagan (STScI). Science: Webb Titan GTO Team.

After we got the Keck data, we turned to atmospheric modeling experts to help interpret it. One of those experts, Juan Lora at Yale University, remarked: “Exciting indeed! I’m glad we’re seeing this, since we’ve been predicting a good bit of cloud activity for this season! We can’t be sure the clouds on November 4th and 6th are the same clouds, but they are a confirmation of seasonal weather patterns.”

The team also collected spectra with Webb’s Near-Infrared Spectrograph (NIRSpec), which is giving us access to many wavelengths that are blocked to ground-based telescopes like Keck by Earth’s atmosphere. This data, which we are still analyzing, will enable us to really probe the composition of Titan’s lower atmosphere and surface in ways that even the Cassini spacecraft could not, and to learn more about what is causing the bright feature seen over the south pole.

We are expecting further Titan data from NIRCam and NIRSpec as well as our first data from Webb’s Mid-Infrared Instrument (MIRI) in May or June of 2023. The MIRI data will reveal an even greater part of Titan’s spectrum, including some wavelengths we have never seen before. This will give us information about the complex gases in Titan’s atmosphere, as well as crucial clues to deciphering why Titan is the only moon in the Solar System with a dense atmosphere.

Maël Es-Sayeh, a graduate student at the Universite Paris Cité, is particularly looking forward to these observations: “I will be using the data from Webb in my PhD research, so it’s very exciting to finally get the real data after years of simulations. I can’t wait to see what will come in part two next year!”