What does Earth’s core have in common with salad dressing? Maybe this 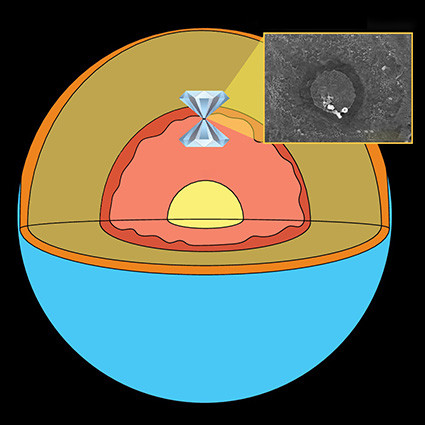 A Yale-led team of scientists may have found a new factor to help explain the ebb and flow of Earth’s magnetic field — and it’s something familiar to anyone who has made a vinaigrette for their salad.

Earth’s magnetic field, produced near the center of the planet, has long acted as a buffer from the harmful radiation of solar winds emanating from the Sun. Without that protection, life on Earth would not have had the opportunity to flourish. Yet our knowledge of Earth’s magnetic field and its evolution is incomplete.

In a new study published May 6 in the Proceedings of the National Academy of Sciences, Yale associate professor Kanani K.M. Lee and her team found that molten iron alloys containing silicon and oxygen form two distinct liquids under conditions similar to those in the Earth’s core. It is a process called immiscibility.

“We observe liquid immiscibility often in everyday life, like when oil and vinegar separate in salad dressing. It is surprising that liquid phase separation can occur when atoms are being forced very close together under the immense pressures of Earth’s core,” said Yale graduate student Sarah Arveson, the study’s lead author.

Immiscibility in complex molten alloys is common at atmospheric pressure and has been well documented by metallurgists and materials scientists. But studies of immiscible alloys at higher pressures have been limited to pressures found in Earth’s upper mantle, located between Earth’s crust and its core.

Even deeper, 2,900 kilometers beneath the surface, is the outer core — a more than 2,000-kilometer thick layer of molten iron. It is the source of the planet’s magnetic field. Although this hot liquid roils vigorously as it convects, making the outer core mostly well-mixed, it has a distinct liquid layer at the top. Seismic waves moving through the outer core travel slower in this top layer than they do in the rest of the outer core.

Scientists have offered several theories to explain this slow liquid layer, including the idea that immiscible iron alloys form layers in the core. But there has been no experimental or theoretical evidence to prove it until now.

Using laser-heated, diamond-anvil cell experiments to generate high pressures, combined with computer simulations, the Yale-led team reproduced conditions found in the outer core. They demonstrated two distinct, molten liquid layers: an oxygen-poor, iron-silicon liquid and an iron-silicon-oxygen liquid. Because the iron-silicon-oxygen layer is less dense, it rises to the top, forming an oxygen-rich layer of liquid.

Our study presents the first observation of immiscible molten metal alloys at such extreme conditions, hinting that immiscibility in metallic melts may be prevalent at high pressures,” said Lee.

The researchers said the findings add a new variable for understanding conditions of the early Earth, as well as how scientists interpret changes in Earth’s magnetic field throughout history.

Additional authors of the study are Jie Deng of Yale and Bijaya Karki of Louisiana State University. The National Science Foundation and the Connecticut Space Grant Consortium funded the research.