What sparked life on Earth? Perhaps bolts from the blue 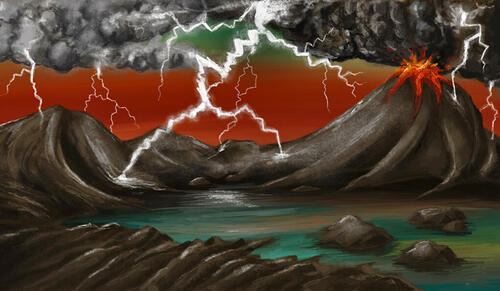 Lightning strikes — perhaps a quintillion of them, occurring over a billion years — may have provided sparks of life for the early Earth.

A new study by researchers at Yale and the University of Leeds contends that over time, these bolts from the blue unlocked the phosphorus necessary for the creation of biomolecules that would be the basis of life on the planet.

“This work helps us understand how life may have formed on Earth and how it could still be forming on other, Earth-like planets,” said lead author Benjamin Hess, a graduate student in Yale’s Department of Earth & Planetary Sciences. 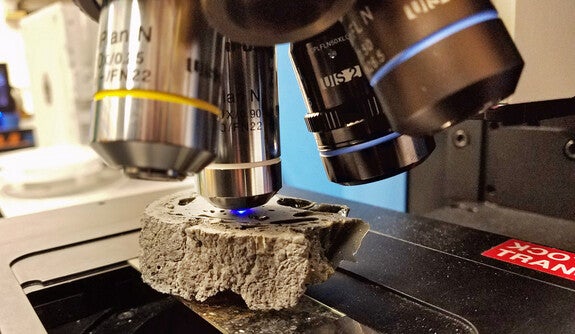 A cut sample of fulgurite being analyzed using Raman spectroscopy at the University of Chicago.

In part, it starts with phosphorus, Hess said.

Phosphorus is a key ingredient necessary for the formation of life — but it was not easily accessible on Earth billions of years ago. For the most part, phosphorus was locked tightly inside insoluble minerals on Earth’s surface.

The question for researchers has been: How did Earth’s phosphorus get into a usable form to help create DNA, RNA, and other biomolecules needed for life?

Scientists looked first at meteorites. The idea was that meteorites containing the phosphorus mineral schreibersite — which is soluble in water — crashed on Earth’s surface with enough frequency to create the conditions necessary for biological life.

The drawback to the meteorite theory, however, had to do with frequency. During the period when life is thought to have begun, anywhere from 3.5 to 4.5 billion years ago, the frequency of meteorite collisions on Earth plummeted. 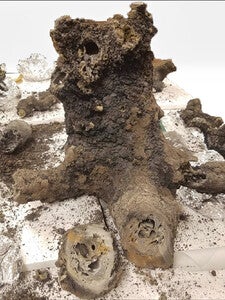 The main piece of fulgurite used in the study. (Credit: Benjamin Hess)

Using results from computer modeling, Hess and co-authors Sandra Piazolo and Jason Harvey from the University of Leeds estimated that early Earth saw 1 to 5 billion lightning flashes every year (compared to about 560 million flashes per year today). Of those early flashes, anywhere from 100 million to 1 billion would have struck the ground annually.

That would add up to 0.1 to 1 quintillion strikes — and quite a bit of usable phosphorus — after a billion years.

The lightning strike theory has other advantages as well, the researchers noted. First, the annual number of lightning strikes would have remained constant, unlike the number of meteorite collisions. In addition, lightning strikes were likely to be most prevalent on land masses in tropical regions, providing more concentrated areas of usable phosphorus.

“It makes lightning strikes a significant pathway toward the origin of life,” Hess said.