Work and COVID-19: How the Pandemic Changed Students’ Career Plans 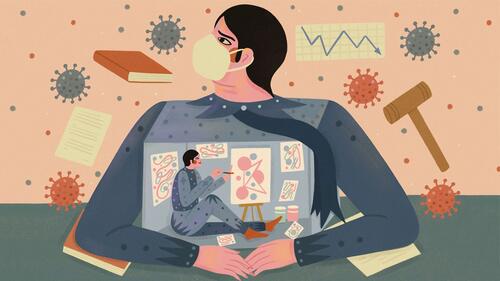 Undergraduate researcher Gavi Welbel’s work on rethinking our agricultural system to be carbon negative was featured in Teen Vogue:

At the beginning of 2020, Rohit Bolla, then a sophomore at the University of Southern California, was set on a career in management consulting. He had a summer internship lined up at a boutique consulting firm in Washington, D.C., and as a politics, philosophy, and economics major, was following a path it seemed most people in his major were taking — then the COVID-19 pandemic hit. His internship was immediately canceled, and Bolla spent the remainder of his semester in his hometown of Dallas. He didn’t know it at the time, but these events were the catalyst for his pursuit of an interest he had always been passionate about but never fully committed to: graphic design.

Whether it was a canceled internship or the unique circumstances presented by remote learning, the pandemic forced many college students and recent graduates to rethink their career plans. Some put more emphasis on financial security while others tapped into interests they previously set to the side. Without the social distractions or campus involvements that often keep college students busy, many found ways to fill their time.

“When I was stuck in my room not doing stuff, I had to entertain myself with my laptop,” Bolla told Teen Vogue. “I started getting really interested in the way companies were shifting their entire ad campaigns for the pandemic.” Bolla made an Instagram account that chronicles the way popular brands have adjusted their visual identities and provides insight into their brand stories. Bolla’s “brand briefs,” as he likes to call them, quickly gained traction from companies, and he soon started freelance designing for local nonprofits and organizations on campus. Just months later, Bolla has made himself a one-stop shop for brand design for on-campus initiatives at USC, and his income from freelancing is enough to pay his rent.

However, not everyone has had Bolla’s experience. Since the pandemic started, more than 22 million jobs were lost (though some of those have been recovered), pushing concerns surrounding job stability to the forefront of many students’ minds. Over four weeks last March, the average daily count of open internships advertised on ZipRecruiter fell by 31%. Some students found themselves suddenly unable to afford college or lost jobs; the same pattern played out for many recent graduates, who were left adrift after being let go from their first jobs and abruptly moving back home. University of Pennsylvania senior Ana Hallman’s internship at the Public Defender Service in Washington, D.C., was one of many opportunities that disappeared overnight. Instead, she spent the summer doing social media work for Solitary Watch, an organization that aims to investigate and oppose solitary confinement in the United States. Soon after her remote internship, however, she started to consider working in the private sector as opposed to nonprofits.

I used to be very into the idea of becoming a lawyer for some kind of nonprofit group,” Hallman told Teen Vogue. “But after the pandemic, I really started shifting gears. Reading articles over the summer about how recovering from the pandemic was going to be so different for people who were in stable jobs, which tend to be corporate, versus people who are not in those jobs, started striking a bit of a chord with me.” Now, Hallman is looking for legal jobs in the private sector, not only because she believes they will provide her more stability, but also because working at a big firm still gives her the opportunity to take on pro bono public interest cases.

Other events in a cataclysmic 2020 pushed and pulled college students in new directions. The national Black Lives Matter uprisings prompted Ahmari Anthony, a senior and journalism major at Howard University, to pivot from journalism to social work. Right before the pandemic, Anthony was beginning to narrow in on a career in investigative journalism, due to her long-standing interest in criminal and social justice. The week of George Floyd’s death, Anthony attended an investigative reporting workshop. As she read more about the limitations media outlets imposed on how journalists should and shouldn’t report on protests, as well as having seen how her local paper removed Black journalists from covering the protests, Anthony began reflecting on other ways she could participate in community-organizing work beyond journalism.

“When Mike Brown was killed, I was in high school, and as [Black Student Union (BSU)] president, I did a lot of stuff to support other Black students in my school,” Anthony said. “Anytime there was a racist incident at my school, I was reaching out to the BSU kids, and always trying to do things to support people in the moment. I realized that if that’s always what my natural instinct is to do, then why am I not following that, career-wise?”

Over the summer, Anthony poured her time and energy into expanding Just Us, a Black, student-led organization she cofounded three years ago that aims to help detained, committed, and incarcerated youth in the Washington, D.C., area. Before this summer, Anthony always saw community organizing as her side passion, and was under the impression that, eventually, she would have to give up volunteer work, because it would become a conflict of interest for her reporting.

“Over the summer, I just realized that there’s a lot of meat in this world now — with climate change, racial injustice, the criminal justice system, and the way that our government really kind of failed a lot of people over the past couple months,” Anthony says. “Watching people get sick and die, I felt like it wasn’t enough for me to just report on the issues.” Now, she is working on applications for social work programs post-graduation.

For other students, their career pivot came as they made the decision to intentionally spend time away from school by taking a gap year. This past fall semester, many colleges continued to operate either completely virtually or through a hybrid model of in-person and virtual classes. Students were forced to consider the downsides of online learning as well as the loss of in-person activities that contribute to the college experience. Weighing these factors, Gavi Welbel, then a sophomore at Yale University, ultimately decided that going back to school this year wasn’t worth it, and she wasn’t the only one: Only 85% of the total Yale undergraduate population enrolled in the fall. Welbel took a gap year instead and embarked on a project she’d always dreamed about but never found the time for: revitalizing the local farm where her father grew up.

“I saw this opportunity to go and live someplace that would allow me to work outside and do actual work that’s not all digital,” Welbel told Teen Vogue. “I also wanted to contribute to something that I care a lot about — both on a personal level of actualizing this 40-year-old vision of my dad’s and on a bigger-picture level, the environment is something that I’m super passionate about.”

The farm, now called Zumwalt Acres, is located in Sheldon, Illinois. Welbel and her twin sister, both natives of nearby Evanston, told a few of her friends who were already on the fence about going back to school about her plan; six of them decided to come with. In August, they all moved to the farm with the mission of advancing regenerative agriculture as an alternative to conventional agriculture and promoting Jewish values. Throughout the semester, the team engaged in agroforestry practices, did research with universities, and created a live-in apprenticeship program for future young farmers. After this experience, Welbel says she is considering switching her second major from urban studies to Earth and planetary sciences. While she can still see herself in a career in urban design and planning, she wants to do it through an environmental lens.

No matter what they end up doing down the line, the circumstances of the pandemic have forced many college students to think about what they value in a career and want to pursue post-grad. “I’m not ready to commit myself to a certain career path just yet,” Welbel said, “But I do think that I’ve realized this year that no matter what I do, I want to be doing something that is rooted in the community.”