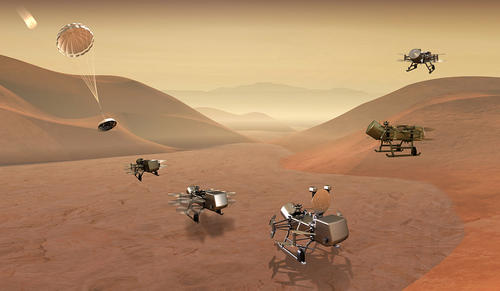 By 2034, when the Dragonfly drone mission makes landfall on the surface of Titan, Yale’s Juan Lora will have spent nearly half his life studying the climatic tendencies of Saturn’s icy moon.

That’s when the real work will begin, he says.

Finally, after long years of preparation and modeling, Lora and his colleagues on the scientific end of the NASA Dragonfly mission will begin to get a better picture of the atmosphere and weather on Titan. In doing so, they may get a clearer glimpse into how Earth’s atmosphere formed long ago.

“In many ways, Titan is more similar to Earth than Mars is, yet we know so little about it,” says Lora, 32, who joined the Department of Geology and Geophysics in January as an assistant professor. “We have this other planetary body in our own solar system that can tell us how atmospheric physics and chemistry work under different conditions. It’s an exciting opportunity.”

NASA announced funding earlier this month for Dragonfly, in which a drone-like craft will land on Titan and investigate its habitability and prebiotic chemistry at dozens of sites. Dragonfly also will monitor atmospheric and surface conditions, study seismic activity, take images of terrain, and evaluate geological processes on Titan.

The mission is scheduled to launch in 2026. It will take eight years to make the 886-million-mile trip to Saturn.

Lora says he didn’t hesitate when he was asked to join Dragonfly’s 30-member science team in 2017. He’s been studying Titan since he was a doctoral student, developing global climate models of the moon. “It’s this amazing place,” he says. “Titan is cold, but its atmosphere is made up mostly of nitrogen, just like Earth, and it has a hydrologic cycle that is also like Earth’s, except with methane instead of water. It’s amazingly terrestrial, yet there’s so much about Titan we don’t know. We don’t even know what the surface is made of.”

Titan is larger than the planet Mercury and is the second-largest moon in our solar system. It has a surface temperature of about minus-290 degrees Fahrenheit.

A previous space mission, Cassini, studied Saturn and its surrounding rings and moons for more than a decade, completing 294 orbits around the planet. That mission also collected a limited amount of data directly from Titan after landing the small Huygens probe in 2005.

Dragonfly will take that a step further, gathering more and different data during its two-years-plus on Titan. For example, it will be able to collect atmospheric data continuously and make flights of several kilometers at a time. Lora says it will cover more ground than all of the Mars rovers put together.

“I helped with the assessment of the climate expected for when and where we’re going,” Lora explained. “We selected a landing site in a place with a lower probability of bad weather. It’s similar in latitude and seasonality to the landing spot for the Huygens probe.”

Dragonfly will be the first NASA mission to fly a multi-rotor vehicle (the drone has eight rotors) to conduct science research on another planet. It will have the ability to carry its entire science payload to multiple sites and repeat experiments. Among its target locations are the floor of a crater where water and complex organic materials key to life once existed, and organic dunes. 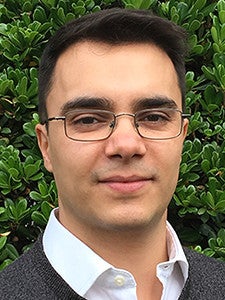 Dragonfly is part of NASA’s New Frontiers program, which includes the New Horizons mission to Pluto and the Kuiper Belt, the Juno mission to Jupiter, and the OSIRIS-REx mission to the asteroid Bennu. The principal investigator for Dragonfly is Elizabeth Turtle, who is based at the Johns Hopkins Applied Physics Laboratory.

As the Dragonfly science team spends the next few years preparing for launch, Lora says much of the focus will be on preparing for the unexpected and being cognizant of all the things they don’t fully understand about Titan. For example, unlike Earth, Titan’s clouds and rain are made of methane.

“We don’t know why the atmosphere there is so saturated with methane,” Lora says. “This is vitally important when you’re creating models of the atmosphere, which is something I’ve been very involved with. How you distribute methane on a planet’s surface affects so much, from cloud formation to winds. We have to be realistic about the possibilities.”

And so, Lora and his colleagues will continue to review Cassini data and keep refining their models of Titan’s atmosphere in anticipation of Dragonfly. Lora says Dragonfly will revitalize public interest in Titan and answer many more questions — before the next mission.

“Outer solar system exploration comes in spurts. We only get to go once in a long while, so we get as much data as we can, then spend years analyzing it,” he says.